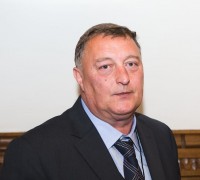 A bereaved father is set to walk 159.5 miles in memory of his daughter Karen who died from epilepsy in 2008 at the age of 26.  Ross Sheridan explained the motivation for his walk. He revealed that his daughter Karen had a bucket list at the back of her diary and that one of the things on that list was for her to visit Ireland, but she never did.

Ross said this will be a special trip to commemorate the 5th anniversary of Karen’s death.  He added that the journey will be very emotional for him as Karen’s ashes are actually resting in Ireland.  Ross will be walking 159.5 miles across Ireland to Karen’s grave.

Ross held a fundraising golf tournament on Sunday 25 August 2013 in London to raise funds for his walk.  He will arrive in Dublin on Saturday 30th August and do a river walk of Heuston Bridge to Sean O'Casey Bridge.  He will then set off on 1 September, 2013 and cover the journey as follows:

Ross said the last day will be the most emotional part of the journey as he will be arriving where his daughter’s ashes are resting.  He plans to arrive at Ned's Point around 13.00pm on 7 September and cover the last leg of the journey to Karen’s grave in half a day.

This is not the first time Ross has embarked on such an amazing feat in memory of his daughter Karen.  In 2012 Ross walked the 250 miles from South Wales to North Wales.  It took Ross 11 days to complete the journey and it rained for most of it, clocking between 16 and 26 miles a day.  Ross re-counted his journey saying: “At one point the road was absolutely flooded and I had to be rescued by a police car. A pub had a spontaneous whip round, and in another I had to apologise because when I sat down there was a big pool of water around me. Even my cigarettes were soaking wet.”

In 2011 Ross paddled 297 miles in a bathtub from Liverpool to London via the grand union canal and networks.  In 2010 Ross walked the 184 mile Thames Towpath trail to London.  All in all Ross has clocked a total of 731 miles and raised over £100,000 in memory of his daughter Karen.  His Ireland walk will take the total miles clocked to 890.  Ross also supported the Launch of The Epilepsy Deaths Register at Parliament on 4 June 2013.

SUDEP Action Acting Chief Executive Karen Osland commended Ross for his awareness and fundraising efforts saying: “Ross has been an amazing supporter of the charity since the death of his daughter. This will be his third walk and as he is walking to Karen’s resting place I feel it may be the most poignant; with sudden death there is so much left unsaid.  We are so grateful to Ross; his dedication to our cause helps us to be here for people who have been bereaved by epilepsy at a time when they need us most.”