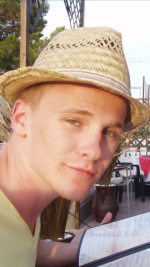 Our involvement with SUDEP Action came about after my son died on the 14 August 2015 – he was 26 years old. The post-mortem result came back as SUDEP and this was the first time we had heard of it. Family and friends now want to bring awareness of epilepsy and SUDEP to the fore and help raise funds for much-needed research because we are all searching for answers as to what happened.

Nathan is a twin with his sister Taryn who is 1 minute older. They were born in South Africa on the 21 December 1988. Taryn was always a leader and Nathan a follower. Nathan was dyslexic and struggled at school. He was bullied at school and struggled to make friends. He struggled with self-confidence and trying to understand why his peers were not accepting of him. Once Nathan started college and work, he came into his own. He made friends and was involved with ten-pin bowling and enjoyed going to the gym. Nathan attended adult education to improve his Maths and English so he could earn more in a better-paid job. He bought an expensive camera and equipment and went to college to study photography. He passed his driving test, but twice had to surrender his license because of seizures; he really wanted to be able to drive again. He bought an expensive bicycle and went riding whenever he could. Nathan looked up to his sister and wished he could be like her. He saw her moving on in life and felt left behind. She bought her own car and he couldn't have the same. She earned more than him but he couldn't manage a better-paid job. He eventually had no choice but to do two-hour shifts at the local supermarket, because he felt so exhausted. He had worked there for eight years and was well loved by all who worked with him. He had his first girlfriend at the age of 25, he was a late bloomer!

The five years before he passed were difficult. Nathan’s seizures progressed to nocturnal seizures, which remained uncontrolled, despite many changes to his medication. He was having seizures every two weeks. Even though he felt terrible, looked sallow and fatigued for a long time, and had visibly lost weight, he still tried to lead a fairly normal life.
We didn’t have a clue that Nathan was at risk or that he could die from his epilepsy, and we weren’t told about SUDEP; so we weren’t aware of what we could do to try and reduce his risks, except to try to stop his seizures. All he wanted was to feel better.

A charity football match took place on Friday 30 October 2015 at Appleby Frodingham, and the local supermarket where Nathan worked in Ashby, held a cake sale and other activities over October half term week 2015.
Other events included, a Ten-Pin Bowling Tournament held at Ashby Bowl on Sunday 15 November 2015 fundraising for Epilepsy Society and SUDEP Action.
We had three runners championing our cause, enter the North Lincolnshire Half Marathon on Sunday 15 May 2016. Then, on the 22 May 2016 we had a Zumbathon held in Gainsborough.
A Coast to Coast Cycling Charity Event (#Ride4Nath) took place from Southport to Hornsea, 215 miles over four days from the 24 June 2016 - where we had 12 people cycling, a driver and two support people. The first two days were wet ones, the last two days were sunny, but no matter the weather, everyone that took part enjoyed the whole experience and it went like clockwork from start to finish.
In October 2016, we held a Charity Ball at Wortley House Hotel in Scunthorpe. 200 people attended and everyone enjoyed it. We had lots of positive feedback and we were so relieved at how well it went because it was our first Ball.

Earlier this year, we held a Bowling Tournament held at AMF Bowl in May 2017. Our friend, Dan Richardson, arranged this year’s bowling tournament and also had t-shirts designed for the people who bowl professionally. A portion from the sale of the t-shirts went to SUDEP Action and they wear them proudly at practice games and matches. Each t-shirt has the SUDEP Action logo and ‘in memory of Nathan Slade’ printed on it with each individual player’s own name printed on the back.

We also produced a Cheeky Charity Calendar for 2017 and one person ran in the Grimsby 10k this July.

We had a Charity Swim take place on Sunday 13 August this year, (on the cusp of the two-year anniversary of Nathan’s death) by Derek Cartwright swimming 40 lengths at Riddings Pool. Together with a Casino Charity Ball, to be held on Saturday 21 October, are other ways of bringing awareness of epilepsy and SUDEP to the fore.

I would like to thank all those people who have helped to support us with our efforts in fundraising. Especially to those people who are still helping to support us today, two years on and struggling with our emotions, as though it was only yesterday. A lot of people have dropped by the wayside but I can say from my own experience, that the loss weighs me down more now, than it did when we first lost Nathan.

He was a sweet soul and never had a bad word to say about anyone, very considerate, polite and cared - OUR BEAUTIFUL BOY.