My Name is Gemma Thompson. I work as an activity worker with adults with autism and learning difficulties, and people with epilepsy. Gareth is a senior scheduler for Sony. In our spare time we run, cycle, and swim, anything to keep fit but also enjoy socialising with friends. We are engaged, and have been together for nearly 5 years. We met at the Portsmouth University Badminton Club. 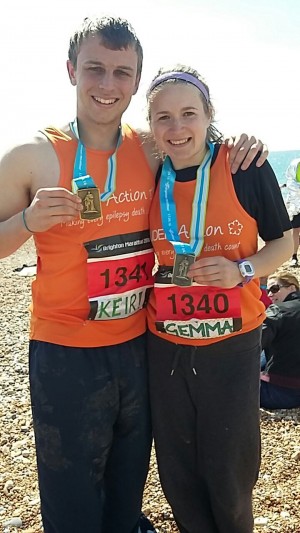 Sadly, our good friend Keir Jackson passed away last May from a seizure. Before this, I didn't know about SUDEP, and that you could pass away after a seizure. Gareth and I therefore wanted to do something to raise awareness of SUDEP Action. Everyone I have told about the charity has never heard of SUDEP so we are both very pleased to spread the awareness.

I did my first marathon last year and after watching me, Gareth was inspired to do one too. So we, along with my dad, decided to run the Brighton Marathon. I thought we might as well make the most of our marathon fitness and enter the Edinburgh one six weeks after. We felt like it would be a good challenge to raise money.

I completed the Brighton Marathon in 3 hours and 33 minutes, which was 9 minutes quicker than last year. It was Gareth's first marathon and he finished in 3 hours 15 minutes. The Brighton Marathon was tough, I found it harder than last year, but I got through it. I saw Gareth and my dad along the route quite a few times as it loops around a lot. Gareth really hit the wall badly in the last 6 miles and struggled with cramp; he slowed down a lot but still managed an amazing time!

During the training in between marathons, we both struggled as our bodies hadn't fully recovered. Marathons take a lot more out of you than you realise!

Gareth and I were both slower at the Edinburgh Marathon, it's like you have given your all and you are just hanging on in there for the finish! it was more undulating than I expected but we both enjoyed it. I finished in 3 hours, 44 minutes, while Gareth managed 3 hours and 23 minutes.

We are really proud to have raised rover £2,200 split between SUDEP Action and another charity. We are grateful for all the generous people who have sponsored us, bought cakes from our various cake sales, and supported us on this journey! We know the money will go towards such a good cause, and we hope to have made people we know more aware.