30th Dec 2012
Fourteen courageous men and women skydived from 13,000ft to remember a little boy who died in his sleep from SUDEP.

The group, mostly mums and dads whose children went to school with 10-year-old Charlie Burns, made the leap over Netheravon, near Salisbury, Wilts, raising £4,000 for Epilepsy Bereaved.

Charlie was a healthy youngster who loved climbing trees and being outdoors until his first ever epilepsy seizure on Friday, October 7, 2011.  But despite being checked over by paramedics, seen by his GP and referred to a neurologist, the youngster was found dead in his bed just four days later. 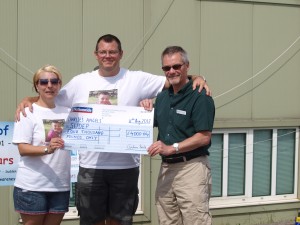 Charlie’s mother Jan Burns said: “It was a fantastic day. The weather was really good and everyone who turned up jumped. I think initially they were really nervous, but once they had done it they were absolutely thrilled and people have asked if we will do another one next year.”

The group included two young jumpers, Holly Moffitt and Charlie Warlow, both aged 17, and Charlie’s former childminder Eileen Robinson, who raised £920, the most collected by an individual.  Eileen, said she was petrified before the jump and spent the flight praying for a soft landing.  “Charlie was with me all the way and my landing was the perfect,” she said. “He was definitely watching over us all.”

Sarah Hirst, the mother of one of Charlie’s school friends who organised the tandem skydive with the Black Knights Royal Artillery display team, was interviewed by BBC Radio Wilts from the dive centre.  EB trustee Roger Scrivens, who was presented with a £4,000 cheque from the day, said: “I was both humbled and privileged to witness the enthusiasm and generosity of so many ordinary folk who wanted to pay respects to the short life of Charlie Burns. It is events like this that spread awareness of SUDEP and help reduce future sad losses like the death of Charlie.”

The Burns family decided to support Epilepsy Bereaved because it is the only charity in the UK dedicated to preventing Sudden Unexpected Death in Epilepsy (SUDEP) and other seizure related deaths.  SUDEP is the term used when someone with epilepsy dies suddenly – often after a seizure that involves a loss of consciousness. It claims more than 500 lives in the UK each year – more than AIDS and cot death combined – yet few people have ever heard of it.

Charlie’s story was raised in the Commons by Conservative MP Claire Perry who called for a national register of epilepsy deaths to highlight the scale of the problem.
Said Barrie: “Our aim is to raise awareness of SUDEP, and make medical authorities recognise the importance of early sightings of seizures. It worked for cot death and yet more die from SUDEP each year. All the money we raise will go directly to EB for research.”

• The Burns family also recently held a bag pack at Tesco in Amesbury, raising £555 towards the total.