SUDEP Action Day is a special day which brings organisations and people together to raise awareness of SUDEP worldwide.

Launched on 23 October 2014 (as SUDEP Awareness Day), it shines a light on the largest cause of death in people with epilepsy, helping empower people through increased awareness.raise funds for SUDEP research.

So what happened during the 2017 event?

The microsite received a lot of traffic during the seven day lead up, and on the 23 October. With just under 4k page views, 65% views on mobile devices across the world. 25 organisations registered but twice as many took part in the day, 50 in total. 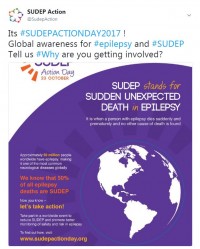 Twitter
On Twitter, we had nearly 16k impressions (the number of times our tweets have been seen) throughout the day. Our first tweet of the day received the most interactions (above).
Our top mention was from Loyle Carner, a celebrity with 45,000 followers.

Activity was also picked up from across the UK, US, Spain, and Australia.

Instagram
This year, Instagram was incorporated into the campaign.
Nearly 90 posts on Instagram were picked up from organisations and individuals using the hashtag #sudepactionday2017 or #sudepawarenessday

Out of the 90 posts, only 14 were from organisations, the rest were from individuals creating awareness or remembering those they had lost.
Activity was picked up from the UK, US, Nigeria and Iran, there are now 190 followers on the account (gradual rise from starting the account in May 2017).
It’s the only social media channel that showed our documents translated into a different language.

Microsite
Newly branded materials were on offer this year for supporters and organisations to use. As well as a new easy-to-use microsite with news, information, and resources. There were top stories about collaboration with Epilepsy Action Australia and the work with Partners Against Mortality in Epilepsy (PAME).
Highlights
• The 150ft Titan cantilever crane  (Dunbartonshire) was lit up in orange and purple to mark the day
• Rise in press interest after the crane was lit up
• A new audience reached with Instagram
• Blogger, Faye Waddams, wrote a great blog post for SUDEP Action Day
• Celebrity, Loyle Carner tweeted about the day
• Great supporter-led event on 22 October,  SUDEP Awareness Walk through London 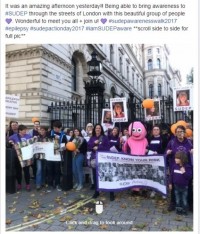 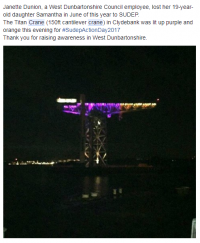