October was a brilliant month for SUDEP Action fundraising 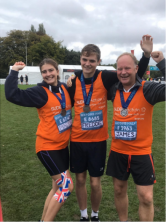 A fab trio ran the Oxford Half Marathon in memory of Maisie Tothill. James Tothill informed us “Freddie, Maddi and James ran the Oxford half marathon at the weekend. Freddie sadly lost his sister Maisie to SUDEP in January this year. After ten weeks of training we arrived early in Oxford for the race. Soon after the start there was a downpour, but that didn’t dampen our spirits, those of the support team or the crowds of Oxford. Most people were running for someone, or a cause, quite a humbling yet positive experience. Maisie would not have believed that her brother would have ever run a half marathon, but we did it her everlasting memory." 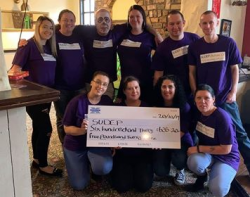 Diane Stanley, Sarah Deakin and a team of super helpers hosted a family fun day. Diane and Sarah told us “We were inspired to hold a charity fundraiser following the death of our uncle, David Washington who sadly passed away in August 2018 from SUDEP. Before he passed away, we had never heard of SUDEP, and once we realised it is a common issue, we wanted to help raise awareness and keep people informed. We were put in touch with the charity SUDEP Action and decided to raise awareness in David's memory. We held a fundraiser at our local pub, with a Raffle, Tombola, Guess the name of the bear and Guess how many sweets in the Jar. We also had a silent auction. In total, we raised a great amount, we spoke to lots of people about SUDEP and helped to raise awareness! We were featured in the local Guardian paper and even had a spot on the Radio! It was great fun. So much so, we are planning our next event next year- a charity Fun run!” 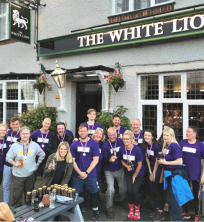 A sposored walk took place in memory of Jon Shaw. Jon’s mum Wendy Shaw informed us, “Sponsored walk all done and dusted, a massive community effort. Hosted by the lovely Jackie at the White Lion, and local businesses supporting by donating lovely raffle prizes. Not forgetting the walkers for giving up their time and suffering the blisters, and all who sponsored the event.” 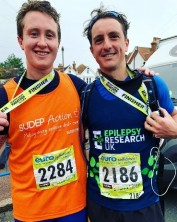 Brett Saunders completed the BeachyHead Marathon in memory of Tom Sibree. Brett told us “I was raising money to help support the work of SUDEP Action, one of my best friend’s, and his family, lost their son Tom, to SUDEP and I wanted to support them by running one of the hardest marathons in the UK. I can confirm this…. I feel very chuffed to have been able to support this wonderful charity doing really great things.” 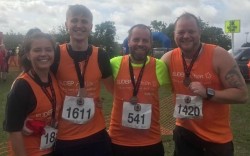 A fantastic team of runners took part in the Southend 10k in memory of Maisie Tothill. Runner Ashley Brown told us “I took part in the Southend 10k along with my son, Oakley Brown, and his girlfriend. Alicia Ryalls-Payne. We met up with other runners, Sam Hurd and Dave Marks. All of us raising money for SUDEP Action. We were representing The Maisie Tothill Foundation which was set up after we sadly lost Maisie, back in January when she suffered a catastrophic epileptic seizure in her sleep at the age of just 22.
Maisie was a remarkable young lady, and through the Foundation we are ‘determined to make a difference’ to the lives of young people and their families by continuing to promote the causes that were so important to Maisie.
When setting up the Foundation we decided, initially, to concentrate on fundraising activities for the dual purpose of raising supporting funds, and of raising awareness of the campaigns working to ensure that families affected by epilepsy, receive more timely and helpful information about the condition. The run was a week before my 50th Birthday and having not run for several years I was determined to train hard in order to make the most of the opportunity.  All five of us completed the 10k in very respectable times, raising a good sum of money along the way. Hopefully we did Maisie proud.
We are continuing to campaign alongside organisations, such as SUDEP Action and have several events planned for the near future.”

Josie Poynter and her fabulous workplace MASH (multi-agency safeguarding hub) held a SUDEP Action Day (Oct 23rd) fundraiser in memory of her brother. She told us “I wanted to organise a fundraiser to raise awareness of SUDEP, following my brother passing away this year in July. It was an awful time for us as a family, and if I can spend time helping raise awareness, then that is what I want to do. It meant a lot of my colleagues to help support me and raise money for something incredibly important. We all dressed up in orange and purple, and a colleague and I baked a cake. It was really successful, and everyone joined in.”

Anne O’Neill ran the Great South 5K Run in memory of her sister Brigit Josephine Marie O'Neill. She informed us “I arrived at the start on a nice sunny Saturday morning and warmed up with the many other runners who were all running for their own reasons. The mayor of Portsmouth set everyone off. I started running with Brigid in my thoughts and in my heart, along Clarence Esplanade towards Clarence Pier with the steel band playing and the crowds cheering, clapping and shouting your name out which was encouraging and helped you along your way. Also I was wearing a poster on my back of my tee-shirt with pictures of Brigid and myself and the charity name on it. Some the other runners patted me on my back when they saw the poster and said "Well done, Keep Going, You are doing Well" which was nice and gave a boost of energy and uplifted my spirits. l than double backed and ran towards the finish along Southsea sea front, and to the finishing line on Clarence Esplanade, with a smile on my face thinking of Brigid.”

Thank you to all our amazing October fundraisers!

If you fundraised in October and would like to be included in this blog, please let us know by emailing [email protected].
If you are reading this blog and have been inspired to take part in a fundraising activity, please call 01235 772850 or email [email protected]. We would love to hear from you.