Home › William
Back to stories page 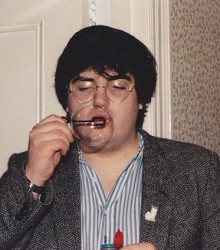 People do not die from epilepsy. That is what we were told when William died as a result of a seizure in 1988. William had his first seizure at 17½ and his last at 22 years. In between he gained four A' Levels, a place at Oxford, a degree in English and planned to become a teacher.

The money that friends and relations donated was given to what was then the British Epilepsy Association, now Epilepsy Action, to be used to fund a booklet. Over the next few years we collected more money and produced 'Epilepsy and the Young Adult', which is still in print today.

In 1994, The Guardian newspaper published an article about a boy called Matthew. It took courage to read it. That was the first time I realized that there were other deaths like William’s but as a result of this article I met Matthew’s mother Catherine Brookes, Jane Hanna, who had lost her partner Alan, his mother, and Sue Kelk, whose daughter Natalie had also died. Together we founded, in 1996, the charity SUDEP Action (working name of Epilepsy Bereaved).  By then we had already been in touch with another sixty families.

The aims of the charity then, and now, are to console and inform families where there has been a death and to give bereaved families the opportunity to meet. The charity began to raise awareness in the UK and around the world. It also encourages and funds research into sudden death from epilepsy.

Our first major achievement, with the help of doctors Stephen Brown and Lina Nashef, was to convene the first ever international workshop on sudden death from epilepsy. The thirty speakers and seventy discussants came from all over the world. It was during this meeting that Sudden Unexpected Death from Epilepsy (SUDEP) was defined.

Our second major success was to get funding for the first national sentinel clinical audit of epilepsy-related death. Published in 2002, it proved that there were nearly a thousand UK deaths a year as a result of epilepsy, of which 500 were SUDEPs. It also showed that possibly 42% of these were preventable. Figures now show that there are, on average, three deaths from epilepsy every day in the UK.

We had, and still have, a hard job persuading epilepsy organizations and even some professionals to talk about the risk, however small, of sudden death. Yet, in fifteen years we have grown from a small organization with one part-time member of staff, to one with worldwide connections, caring for nearly a thousand families.

So now we know that people can die as result of a seizure. I wish I had known that when William died, as it would have been a comfort to talk to other families who had suffered in the same way.