Home › Tim
Back to stories page 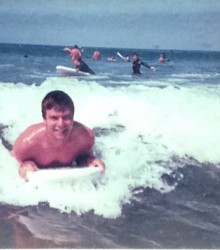 Our seven-year-old son Tim, (the third of our four children) was taken out with his brother and sister by a friend for a Pantomime treat in Leicester, while I was having major surgery in a London hospital.

While crossing a busy main road, all the cars had stopped at a zebra crossing, for them to cross safely, when a speeding car rushed down the outside, ploughing into all three children and adult.

Tim was the most seriously injured, sustaining a fractured skull, collar bone, concussion and other things, spending days unconscious in hospital. This resulted in Post Traumatic Temporal Lobe Epilepsy, which badly affected his whole life up to his sudden traumatic death in his forties.

Tim coped so bravely with his many kinds of seizures, (including, Status Epilepticus). The awful side effects of many kinds of medication, and the terrible way that his epilepsy affected his schooling, work life, and his relationships with others, often led to him being misunderstood or rejected.

Yet, he spent much time and energy helping others, especially old people and those with special needs.

Although, being told by a London consultant that he would never be able to attend ordinary school, Tim proved him wrong. He went to a normal Church Junior School in Woodley, then to the Reading Blue Coat School, obtaining O levels and A levels. Then to St. Pauls and St Mary s Teacher Training College, Cheltenham, finally obtaining a Maths Education degree at Sunderland University.

He was later able to buy his own house in Spennymoor, County Durham, where he lived and worked for 10 years. But gradually, his night time seizures worsened, rendering him unable to stay in paid employment.

Tragically, when staying with me in Swanage, after his dear father had died a year before, I found my beloved son dead on the floor beside his bed one morning, having died from a major seizure, Sudden Unexpected Death in Epilepsy (SUDEP).

A devastating shock and grief to bear for all his family.

A life so positively and bravely lived, now with Jesus in "fullness of joy and peace”.

Tim, we salute you, and thank God for your life with us.

I now run SUDEP Action Coffee Club groups, to try and be of help to others facing lives touched by SUDEP.