Home › Silas
Back to stories page 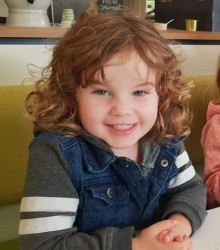 Silas was a very happy and active boy with a great sense of humour. He loved Watching movies with me and playing with his friends and our neighbours. He was just 3 weeks shy of his 3rd birthday when he died. He was meant to move up to the Kindy (kindergarten) room at day care that day and was so excited the night before.

He first started having seizures at 8 months old, and he also had Paroxysmal Tonic Upgaze, a rare condition that made his eyes gaze upward. We took him to all his neurology appointments and typically, Silas had seizures in clusters. A common cold could trigger a new cluster, resulting in another hospital visit.
I was told by some doctors that I was being dramatic for taking him to hospital every time his seizures came back. I had one member of staff in emergency tell me his seizures were quite "harmless".

That was 2 months prior to the 18 October 2019.
The house was quiet.
I'd overslept, as he usually wakes me up early in the morning. I yelled out from my bed "Morning Silas." No reply. My stomach sank. I went to his room, and he was already gone, there was nothing emergency services could do.

I hadn't heard of SUDEP until I spoke to the coroner over the phone.

My son Silas loved to help me bake treats, ride his bike, and read books. His favourite things were Toy Story and Shrek, and he was big on cuddles. My world has been tipped upside down since losing him.

More awareness needs to be made to those with epilepsy and their families about the risk of SUDEP.