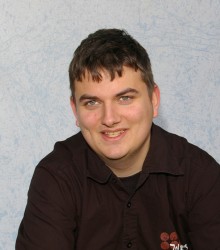 This was written on the date Seán was born – but 10 years after he was taken from us.

Seán was born on 21st May 1986, the second of our five children. He soon made his mark.
Maybe a little late in starting to talk, but he made up for it by speaking in full sentences from the beginning. We were surprised, but not astounded. Yet, it was when he learned reading at the same time as his two-year older sibling, that we started noticing that there was something special about our Seán. He became an expert in palaeontology – read everything he could get his hands on about dinosaurs. He knew them all, could pronounce their names and was absorbed by the fascination that surrounds them.
During his formative years, he sometimes collided with teachers when they were lacking in some knowledge that Seán took for granted, however it was clear that he was a VERY clever boy. Whatever he chose to do, he did excellently.
As he passed into his teens this didn’t change – he was sharp-witted and funny – but also a never-ending source of facts and information on any topic you cared to share with him. He was our genius.

At about 17, he had his first seizure and was taken to hospital. There, an epilepsy specialist decided that his case was of interest, due to his age, and the fact he would have been starting driving lessons and was looking to going to university.
This meant he was diagnosed early and was soon put on medication. Once Seán accepted the situation and realised the possible side-effects, he decided that he needed to engage with some sport to stave off any possible weight gain the drugs might cause. As it was his dad’s sport too, he chose fencing. A sport that he would enjoy to the last.

As he was growing up, his passion was for flight. He had his eyes on a career in the RAF or something similar – getting his wings was one of his goals.
After the diagnosis of epilepsy this was unattainable, so he settled instead on studying aerospace engineering – if he couldn’t fly planes, then he was going to design the ones that future pilots would fly!
And so, he left home to study at University. The first two years seemed to pass by quickly. He was at the same university as his elder brother James – so for those years they shared a lot of good times.

Then in March 2008, the University hosted the BUSA Fencing Championships – Seán was part of the organising committee, as well as competing in his own right.
At the end of the weekend, Sunday 2nd March there was a brief conversation and text message exchange with his dad that night. After which, he responded to no further communications from friends, as of the following day . This was not concerning to them, although he did miss an event on the Tuesday evening. We were quite used to not hearing from Seán for days on end.
He was discovered in his room on the Thursday evening. He had passed away.

From that point, to today, the family is still heart-broken and figuring out how to come to terms with the loss we could never have expected.
The cause of death was not determined as SUDEP, yet it was clearly attributed to his epilepsy. Something the family had never imagined could be fatal.

His dad thinks he could write a book about the ensuing years and the heartache they suffered, handling the post-mortem, funeral and eventually an inquest. Maybe if epilepsy had been better understood and the family had had the kind of information available today, it would be different.

Seán’s sister, Amy, was also diagnosed with epilepsy – about six months before he died. In some respects, our family are continually living under a cloud, even though we are trying hard to rationalise the situation in order that we can keep living.

Over the intervening years, we have commemorated Seán in numerous ways – there is a corner in the garden dedicated to him, which includes a sundial which we calibrate on his birthday. James (his brother) has run the London Marathon in his memory – more than once! We also have a tree planted which we visit from time to time.

At the graduation ceremony in July 2008 Seán was awarded his BSc Aerospace Engineering – posthumously – which his father was very proud to accept on his behalf.

The photo accompanying this was taken during the Christmas holidays 2007. When Seán was younger he was always happy and eager to pose for the camera. He was also very photogenic, and we are lucky to have many good pictures of him. In his teens he definitely wasn’t a fan of the camera! So, it was a happy surprise that when his dad decided to take a series of portraits of all the children, that Seán agreed to sit for this one.
One for the books, as they say.

He is always loved, never forgotten.