Home › Ryan
Back to stories page 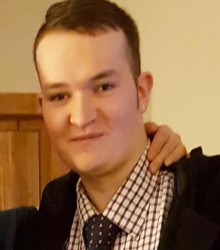 My son Ryan, as we called him, or Barry Ryan Patten as he was named, was born on the 25th May 1991 at a tiny 7lb.  I had pre-eclampsia with this pregnancy and he was delivered early.  We both recovered well and life at home carried on with his brother Daniel (aged 18 months at the time).

Ryan’s milestones were slower than other babies, but nothing that seemed too alarming, but when he was about 18 months old, he developed a bad cough only at night.  A trip to the GP sent us to the hospital and he was diagnosed with SVT (super ventricular tachycardia) where the heart races uncontrollably.  Trying to medicate a toddler with this condition was extremely upsetting, and over the next few years Ryan and I spend many years in and out of hospital.  At around the age of 4, I noticed Ryan seemed a bit spaced out from time to time, and so he was diagnosed with Petit Mal epilepsy (absence seizures).

Medication controlled this and life carried on quite well.  His heart condition was treated at a London Hospital and things were good.

As he got older into his teens his epilepsy changed, and he started to have differing kinds of seizures, not going completely, but spaced out, vomiting, speaking in complete nonsense.  He would kind of know when he was going to get one of these, as he would tell me ‘Mum, I feel a bit weird.’

His behaviour had changed as well and further investigations revealed he had Asperger’s Syndrome which was diagnosed at the age of 21, after much arguing with the local authorities over the years with them just saying he was ‘badly behaved!’ A sister, Tia joined our family in 1996.

Ryan lived at home with me and the family, he didn’t manage to qualify at school and struggled to make friends with his Asperger’s.  However. I found an organisation Personalised For Autism, that enabled him to move into his own home (supported living) at the age of 23.  Life was on the up for Ryan, he started going out, making friends, becoming independent and learning to live his life as how I wanted him to without me.  Things were never easy as I was always in the background, always making sure he was safe, took his medication, let staff know where he was on time and making sure he wasn’t at risk of being taken advantage of.

That Sunday the 10th February started like any other. I was at home alone, I had seen Ryan the day before, and at 4pm I had a call from David, one of his carers who didn’t know who to tell, so he just said it …. ‘Clare I’m so sorry to tell you that Ryan has passed away’.

I can’t quite erase the horror of that day when time stopped still. The vivid rawness of those final moments, and the brutality of living each day with this ache in my heart, makes it seem unbelievable that he’s not here anymore.

The Coroner recorded SUDEP on the death certificate.  There were no other factors attributing to his death, according to the Coroner his heart, brain, and body were perfectly healthy, in his words to me it was just like someone had turned off the power switch…. just like that.

Ryan was 27 years old.  Does it give me any comfort?  I am not sure. I saw Ryan at home after he died, he was in his bed lying on his side, and looked asleep, just like he had gone the night before, his phone was right next to him, there was no sign of pain, injury, trauma, it was just like he went to sleep and never woke up.  If he was ever in pain or trouble he would ALWAYS call me, that night he didn’t so that tells me he just slipped into sleep and never woke up.  He would never ever have been aware of anything the experts have told me.

I always knew epilepsy was serious but NEVER ever did I think Ryan would die from it, never in a MILLION years.  To be honest I am glad that I didn’t know this could happen looking back.

He had a good, wonderful life, he was so loved by all his family, me (Clare), his brother and sister, nephew, aunty, uncle, Dad and stepdad and I have some wonderful memories.  At the very end of his life he was so happy, he had found a girlfriend who truly loved him and I take comfort from that.  At last he had found his happy place.

I try to stay positive as I will never ever get the answers to the many questions, I have asked out loud as to WHY?  There is no answer specifically I will ever get.

I can’t take comfort in religion, or God quotes, as I don’t feel that it is fair that a young man, has been taken so unjustly when he had so much to live for.  A compassionate God?