Home › Roy
Back to stories page 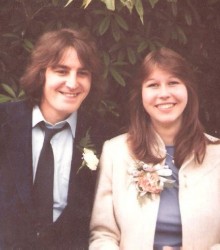 We married in 1981 and had our first daughter Sarah in June 1982. We were young but were happy with our perfect little family, and believed we had a bright future to look forward too. How wrong we were.

On Christmas Eve 1983, Roy suffered a massive brain haemorrhage aged just 26. It came totally out of the blue and left him in a coma. Roy was given a CT scan and it was decided that he needed surgery to save his life.

When he returned home three months later, he was left with right sided weakness, difficulty with his speech and memory, and spent months trying to regain the skills of walking and talking.

Around 12 months later Roy suffered his first Tonic Clonic Epileptic seizure. It again came completely out of the blue and having never seen a seizure before, I found it completely terrifying. I called an ambulance, and at the hospital I was told that, because of his previous brain surgery, it was inevitable that he would be left with epilepsy, due to the scarring on his brain.
This is something I was not informed of.
This became the first time that I felt let down by a lack of information from the medical profession. By this time, I was due to have our second child, and Hayley was born a few weeks later in 1984. Whilst we may not have made the decision to have another child, (had we known Roy would suffer from epilepsy), she became a source of much needed joy, at a very difficult time.

Roy's epilepsy was uncontrolled, despite trying combinations of many different drugs.
However, at no point were we ever warned about the dangers of SUDEP.
We were advised about the risk of him taking a bath without someone being around, but apart from that, there were no other warnings. Despite him attempting to work, it was deemed unsafe by his employers and he was let go due to his epilepsy. He found this a depressing time and felt that he was no longer a useful member of society.

In 1986 I enrolled in college and did a full-time course lasting two years. I was then offered a full-time job working for the NHS, which I took, and our roles changed. I became the breadwinner and Roy looked after the home and the children.

In 1995 we had our third daughter Lauren. We continued with our lives living with epilepsy, taking it for granted that Roy would have seizures but at no point worrying that one day this could take his life.

In late 2004, Roy's seizures began to increase and despite visits to his GP, no extra measures were put in place.
On 6th May 2005, I again made an appointment for Roy to visit his GP as I was becoming worried by the increasing frequency of his seizures. I took the day off work but when it came to taking him, he announced that he did not want to go due to the fact that nothing was ever achieved by these appointments. We did have cross words about this as I wanted him to go but he was unmovable in his decision. He said that if he had another seizure then he would definitely go next time.

On 10th May 2005 I left for work as usual. I am not sure why, but I began to feel uneasy and rang my mum to ask her to go and check on Roy. She turned up at my work to say that she had been to the house but had got no reply. I left work and went home but was unable to gain access as the key was in the door on the inside, which meant I was unable to open it with my key. By this time, I was so worried I called the police. They forced access to the house and found him face down on the bedroom floor. The ambulance arrived and they declared his life extinct. He was left in the house as the ambulance do not take the deceased to hospital and a private ambulance was arranged to take him away.
He was 47 years old.

I was not allowed to see my husband at this time, and it would be some 10 days before I would get to see him at the chapel of rest.

The worst thing I have ever had to do is to tell my 3 daughters that their dad had passed away.
My eldest Sarah, to this day, still can not talk about her dad.
Hayley struggled for many years but in recent years has made her peace with it.
Lauren has suffered from anxiety ever since. I put that down to the trauma of that day. She got up that morning and left for school with two parents. When she returned that same day aged just 9, one of her parents had died.

I remember the pain and the shock like it was yesterday.
15 years later I am still unable to come to terms with it. I feel totally let down by the medical profession. I remember the GP at the time saying that it was inevitable that epilepsy would take Roy's life at some point. When I questioned him as to why we had not been warned about this, he said that he did not tell us as he did not want to scare us.
Surely everyone who lives with epilepsy should be given this information. Not to scare them but to give them the chance to put plans into place to prevent these unnecessary deaths.

I have done much research since Roy's death and have found support from SUDEP Action who at the time were called Epilepsy Bereaved. However, I am left with the guilt of knowing that if I had done all the research when Roy was still alive, then the decisions I made would have been entirely different. I would not have returned to work leaving him alone all those years. I would have either stayed home and cared for him myself or made sure someone was with him when I was not around. Maybe then, he would not have died alone and afraid.
I know that this is all hindsight, but it haunts me to this day.
I remain in a state of limbo and I only hope that by sharing stories like my own, other families will gain the knowledge of SUDEP.
If it saves just one life, then my story will have been worthwhile.

Roy was a gentle soul. He loved music, his favourites being Bob Dylan and David Bowie. He had an interest in birds, especially birds of prey. He was fiercely protective of his family and we all feel blessed to have had him in our lives. In our minds, he remains forever young.