Home › Richard
Back to stories page 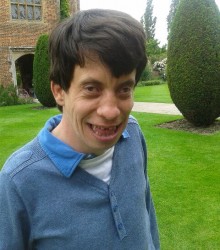 On the Tuesday 30th June 2015, my life changed forever, when at 7.30 a.m. my husband came into the bedroom to make sure I was up in time to have our youngest son ready for his day care placement. His first words were that Richard, our darling son, who had learning disabilities and epilepsy, was still asleep. He had had a seizure at 6.30 the evening before, during dinner but was fine when he went to bed and on the two occasions I checked  him during the night.

I can’t explain why but this filled me with dread. I entered the room with trepidation and instantly realised that our darling son was no longer with us. I shouted, he’s dead, my husband asked how could he be.
The only thing I knew I had to do was phone our son Timothy to tell him and ask for help. He calmly told me to ring 999 and tell them what had happened and that he would be over. The other was to phone his placement at The Parchment Trust to cancel his transport for that morning.

I wanted to scream and shout at the policeman who sat with me when he told me my darling son was in a better place. It breaks my heart still that I never took him in my arms again to say goodbye. I can still see him lying there, when I go into his bedroom. Timothy phoned his brothers, who stopped what they were doing and came to join us with grief and disbelief. I am not sure what happened the rest of the day or night. Come to think of it, I can’t remember anything other than Timothy coming over to be with us the following day whilst we found an undertakers to arrange for his funeral.

The undertakers were so calm and helpful, they asked if we would like an online memorial for Richard and showed us how it would look on their computer. By mid afternoon it was all set up and ready to go for us. I phoned Parchment to inform them when the funeral was arranged for, and asked at the same time if they had any suggestions as to where it could be held. She, Theresa, asked if we would like to have his wake at his beloved Friary Gardeners, in their beautiful gardens, she then said we wouldn’t have to worry about anything as they would organise everything for us, which was incredible.

The two weeks prior to the funeral, which was arranged for 15th July, are a blur; I just remember taking my sandals with me on the day of the funeral to change into if needed.

When we arrived at the crematorium over 150 friends and family had come to say their last farewells, which was so moving. All of Richard’s brothers said they wanted to be pall bearers. I was so very proud of them as it was such a courageous thing to do. When the hearse arrived I just wanted to scream NO.

The service was a simple one, I had written the eulogy as after all I knew him best of all. I tried to make it amusing and light as I possibly could. With Tim’s help we chose the music which came from some of Richard’s favourite dvds, Back to the Future, Any Which Way but Loose, Only Fools and Horses plus others. I can’t remember much about the service or what happened afterwards except trying to thank everyone in between tears. People have since said it was the most beautiful one they had ever attended. The only flowers I remembered seeing were Friary Gardeners beautiful wreath of the Thundercats logo and our flowers.

I do remember that we were about the last to leave the crematorium and that I did change into my sandals on for comfort. We made our way just down the road to Friary Gardeners where everyone was gathered for Richard’s wake. Friends and family kept on finding me chairs to sit down on but I couldn’t remain in anyone place. Everything seemed so surreal. It couldn’t be my darling boy. How was I ever going to survive without my darling son, my world, my everything, my baby. I just didn’t know.

I tried to introduce everyone to our family, not sure if I succeed, and to thank them for coming. What broke my heart so much was seeing how devastated Richard’s friends were. They found it so difficult to comprehend what had happened. All I could do for them was try to hug them all and have a quiet word with them, bless them.

In the weeks that followed, I can’t remember what we did or where we went. Sleep was very difficult, I am very good at playing solitaire in the middle of the night now. Even though everyone was so supportive including my doctor, l found everything was too much for me to cope with. We had to wait three months for results of the post-mortem. Which was horrendous. When the coroner phoned and said he had died of SUDEP, we were devastated as to how that could have happened. Even my doctor hadn’t heard of it. I Googled it to try and understand more. That, in itself was fortuitous as I came across the SUDEP Action website. I started to fill in the former for registering a death but found it just too much, so after leaving it for quite a few weeks decided to phone the number on their website to ask for help filling it in. Immediately I started to explain why I was phoning, this beautiful soothing voice asked me if I would like her help at completing it. Over the next few weeks, the form was finally completed. I found it so easy to talk and cry about my loss with Tracey. My doctor had wanted me to have counselling but I was against it, but here, just a phone call away, was the person who understood completely, without me having to explain everything, someone I could unburden myself to. The feeling of relief was incredible. I have now been talking with Tracey nearly every week for about six months. She is amazing as is SUDEP Action. I feel that I am so fortunate to have found them. If there is anyone else that needs help after an epilepsy related death, please don’t hesitate, ring their number and ask for help. I will forever be eternally grateful that I did.