Home › Rebecca
Back to stories page 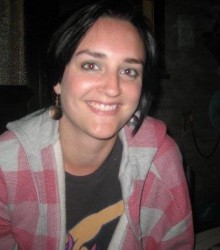 My sister...what can I say. There is no person that has walked this Earth that has had a more profound impact on my life. I don’t say that because she has gone and I find myself writing a piece like this, but losing her to SUDEP has certainly made me realise how very influential she was in shaping me into the man I am today.

When she arrived in December 1983, I was initially disappointed as I hoping for a baby brother, who I had already decided would be called Alexander after my grandad. This quickly faded as I became besotted with our new arrival, Rebecca Helen Hayward.

Like most siblings growing up, we fought from time to time but overall we were the best of friends. She was playful, lively and fun to be around, except when I was trying to be cool, hanging out with my mates in my early teens. She always had a crush on at least one them and wouldn’t leave us alone!

In 1992 she started to take an interest in music, particularly by playing the pots and pans along to our Dad’s queen videos. This proved to be more than a passing phase so for Christmas she got a drum kit but the only place it could go was in my bedroom.

In time, despite some natural ability, her interest in drumming waned as mine grew.

It wasn’t long after this time that she had her first epileptic seizure. They tended to be in the early hours of the morning, around the time she was due to wake up. We felt lucky that she didn’t have them in the daytime as our biggest concern was that she might fall during a seizure and hurt herself. At least in bed, she was safe, or so we thought.

After quite some time, through much trial and error, the doctors found the right pills for her and she became seizure free. After a year she was able to pass her driving test first time, gaining the independence she craved.

She loved driving with the music full blast, fingers tapping on the wheel and singing at the top of her lungs. She became the life and soul of the party as her confidence grew, and found a new lease of life when she signed up to a photography degree.

For years she’d wanted to pursue photography but felt she was too old to start uni, then the following year, once the University application season was over, the same burning desire to study her passion remained. Eventually, she realised that had she signed up when she first thought about it, she’d have her degree by now! She adopted the “screw it, let’s do it” attitude and off she went!

She had the best time at Solent University between 2008 and 2011 when she graduated. Did she wish she had started earlier? No way. The people she shared those years with were the perfect fit for Rebecca. I know she had a profound effect on them, especially as I still hear even now, how people not only loved her but admired her as a true free spirit.

After graduating she decided she wanted to go into teaching so she took herself back to college to improve her grades in Maths, Science, and English. She had fallen in love with learning again.

It was also around this time she started fitting again. With that began the quest to find the right medication to get her seizure free. Despite losing the level of independence she enjoyed from driving, she did little to complain.

In fact, on those Tuesdays when she studied, I’d often pick her up after college. On the way back we’d often listen to the latest Foo Fighters Album - Wasting Light. There was one song that was our favourite, called Walk. I guess you’d call it our song.

Rebecca loved it so much that when it came on, conversation was BANNED! All so she could rock out to the whole song, uninterrupted! This was typical of her approach when it came to life. She was all in.

In February of 2012, Dad asked me if I could go with her to see her epilepsy specialist, so I could get some clarity on some points that my sister was often reluctant to ask. Whilst there the specialist casually threw into conversation,

“Well, the next fit you have could be one that kills you.”

I felt my stomach drop. My sister and I glanced at each other nervously but we quickly shrugged it off with either disbelief or denial.

The last time I saw Rebecca was the morning of Thursday 21st June. I had an early morning appointment close to her flat so I stayed over the night before.

When I arrived she was doing some sort of studying, which at first I thought was weird as she had only just finished her exams the week before. I asked her what she was up to and she said she was learning capital cities of the world because she didn’t want to be like those idiot reality stars on TV!

The next morning we hugged goodbye and I went on my way.

On Saturday morning I woke up at the Isle of Wight Festival, soon after to get a distraught voicemail from her flatmate. Barely able to speak, she told me she had found Rebecca not breathing and I needed to get back straight away.

I called again and a medic answered saying she had had a cardiac arrest and was very poorly. I remember thinking...very poorly, that’s not so bad. I called my dad who was on his way. He sounded calm too and that left me more at ease. At worse, I expected to see her in a hospital bed looking a bit worse for wear. I planned on playfully giving her a hard time for dragging me away from my friends. I caught the ferry back and headed to the hospital.

I asked the receptionists where she was and they looked at each other awkwardly, telling me to head through some doors.

Next thing I know, I’m in a room with Mum, Dad and Rebecca. 4 people, but just 3 lives.

So whilst Rebecca’s own story ended there, her influence lives on.

In 2012 we paid tribute to Rebecca by reforming our band The Warm. She was a big fan of the band that split 2 years earlier.

We raised money for the Charity SUDEP Action, who dedicate their work to helping people understand epilepsy better, care for bereaved families and aim to bring down the number of deaths caused by the so-called Silent Killer.

“This is all because of you…”

I had never had any interest in playing music until she picked up the sticks and I am so glad she did. Through music, I have made wonderful friends, shared incredible experiences and get to do something I love for a living. I became a professional drummer and I attribute it all to her.

Terry Pratchett said something along the lines of no one is ever truly gone until the ripples they created in life fade away.

Those ripples live on through me and others that she influenced and inspired and it is my mission to ensure they have as much impact on this Earth as possible.

Every day, whether I am teaching a future drumming hopeful, drumming for fun or sharing moments onstage with my bandmates as we entertain the crowd, I know that the privilege of enjoying those moments is all thanks to her.

It inspires me to be my best in all I do so that I can impact people in the most positive way, knowing that so much of what I do comes from a spark that she created.

On Friday 22nd June 2012, she went to bed with hopes and dreams, excited for the future. Sadly this would be for the last time.

Through this campaign I hope to achieve a few things:

In the run-up, it gives me a platform from which I can share the good work of the charity SUDEP Action, who were there to support us and other bereaved families.

It enables me to promote their message that epilepsy can be better managed and that they are working to bring down the number of epilepsy-related deaths, an average of at least 3 per day here in the UK.

Plus I get to share stories about my wonderful sister with a larger audience, keeping her memory alive.

Finally, if it happens, it would simply be an epic way for those that knew and loved her to hear Rebecca's name said in a way that is befitting of the superstar she was.

If you would like to help us spread the word, please share this link on your social media with the hashtags #Walk4Rebecca and #FooFighters

For reading, sharing and being part of her legacy...Thank you so much!