Home › Ravin
Back to stories page 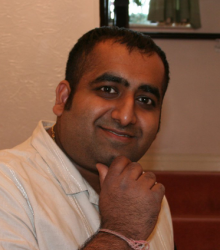 On the 12th February 2011, at approximately 6:00pm, our brother Ravin J Dattani sadly passed away.  He was 29 years old.  The exact cause of death is unknown as of yet; however the signs point to SUDEP.  Ravin’s epilepsy started when he was 15 years old; he accepted it, and never let it rule his life.

Ravin was one of twelve grandchildren.  The most important people in his life were his wife Reshma, dad Jayanti, mum Kirti, and younger sister Jalpa, along with his extended family.

Ravin’s instinct was to protect and look after people.  This was due to his upbringing and the values his parents instilled in him from a young age.  Ravin and Jalpa shared a deep bond, they would not need to show it, but you could tell instantly how much Ravin loved Jalpa and how he always wanted to be there for her and protect her.

Ravin was the rock of the family.  He took each and every family member under his wing, comforting, supporting, and directing us, no matter what.

Though we are all cousins, we are as close as brothers and sisters.  One of the main reasons why we see ourselves in that way is due to Ravin.  He always made sure we knew that family is the most important thing in the world, and in this respect it made us want to be more like him.  For that Ravin, we thank you.

In all aspects of life Ravin showed strength of character, determination and always displayed perseverance in the face of adversity.  Ravin never let it show when he was feeling down.  He would bring warmth into the room with his gentle smile and heart of gold.  We want to thank you Ravin, for being our brother, our friend, our teacher, and our sunshine when it was raining.

The family has been supported by SUDEP Action (previously known as Epilepsy Bereaved), and we believe the work they do in raising awareness about SUDEP and in providing support for families is invaluable.

Ravin’s loss is felt by so many; we want other families to be aware of SUDEP.  Thirty six of us, including family, extended family and friends, came together in July 2011 to participate in the British London 10k run, and we will continue to raise money and awareness in the future, in order to help others who have been bereaved through epilepsy.