Home › Natalie
Back to stories page 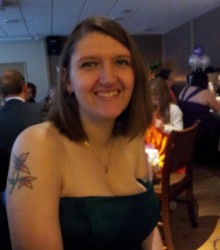 In October 2015, my daughter Natalie died at the age of 31, leaving our two grandchildren aged 2 and 4. Living with her epilepsy, Natalie was never one to complain or wallow in self-pity. She loved life, and despite all the fits and absences, she never let it get her down, Natalie was always bright and cheerful.

From the very beginning, consultants said that the chances of Natalie having children would be remote, and that she would have to come off her medication for at least a year. Then four years ago she became pregnant with our Grandson, and despite medical concerns, everything was absolutely fine. Two years later, and 5 months into her term, Natalie was told, "You are pregnant", and  along came our beautiful Granddaughter.

Then one afternoon in October, I got a text message from Natalie, which simply read, "Hiya dad, sorry not rang. Had a couple of small fits this afternoon, so feeling crap and having an early night. Call you in the morning. Love you".

The following morning her mum found her dead in bed, and our whole world was destroyed. We never expected it, and had always been told her epilepsy, while serious, was not life threatening as such. The post mortem was inconclusive, and they could find absolutely no reason why Natalie had died suddenly.

Now, four months on, and the pain is still as bad as ever. I miss her so much, and it’s that not knowing or having no explanation, that makes her passing so much more cruel and futile. The legacy Natalie left behind, of our two beautiful Grandchildren, is the only thing that makes life bearable, but even then, the tears never stop. It’s that song, the TV advert, or even a certain smell, that brings her back to me, yet no more hugs, cuddles or kisses.

To everyone, whether having epilepsy in your family or not, I say this. Never ever put off making that promised visit, returning that phone call, or replying to that text message. Life offers us NO second chances and can be cruel in the extreme. How do you begin to explain to a 4 year old, why he can't give his home made Mothers Day card to his mummy Love you to the moon and back again Natalie. XXxx Dad