Home › Mislav
Back to stories page 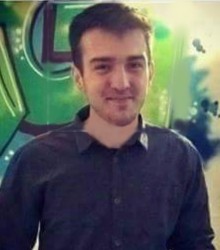 This is my son Mislav, born in 1995, he was a twin. Up to the age of three, I noticed no signs of any illness. Just before his third birthday he started to have involuntary eye-twitches. This is when he was diagnosed with epilepsy and petit mal seizures. He had a relatively healthy and calm childhood up to the age of seven, when he ended up in hospital with Status Epilepticus.

Prior to this we noticed that one of his medications caused him stronger seizures, so they were removed from his therapy. He was diagnosed with mutation of 3 genes, which resulted in negative reactions to anti-epilepsy medication. We tried a Ketogenic diet but saw no result after 2 years. At this stage he had no seizures during the day just at night in his sleep.

At the age of 14 he was operated on in Germany. For three years after this he had no seizures at all! His ECG was totally normal, they even asked us to compare it with his twin sister and found that his was better than hers. Three weeks after a compulsory vaccination (our doctors don’t think its connected, but we disagree) Mislav experienced a grand mal seizure in his sleep. He returned to therapy with a new medication.

Despite all this, Mislav graduated high-school with straight As and was accepted into the University for Political Studies. This photo (above) is one that his University friends and colleagues used to say goodbye to him. Mislav completed his third year at Uni, all was relatively well just occasional seizures few and far between in sleep.

In Croatia, I had never heard about SUDEP until a friend forwarded SUDEP Action’s link to me. This is where I recognised his case. On 13 May 2016, he simply didn’t wake up. No-one ever told me that that could be the case, though now I see it’s the same with most of your sad testimonies.

The Coroner’s report took a long time – the results were read to me by a friend who is a nurse. They said that he was a totally young healthy man, no trace of any reason for his death.

This is the first time I have spoken or written about his death in four years. So please let me tell you that he was a child who was never without a smile, he never complained of any pain, I don’t have a single photo of him without a happy expression, in spite him going through so much. He was a young man full of empathy for those less fortunate than him, this photo of him is from a cake sale raising money for others in need.