Home › Max
Back to stories page 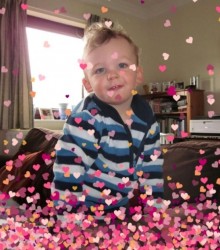 Max was born on 4 August 2009 at 35 weeks, it was a quick labour with ventouse delivery, as my waters broke due to a ruptured placenta. Max weighed 5lb at birth but soon gained weight and seemed to be a very healthy baby.  We did not see any issues from the traumatic birth.

Max was a very energetic happy baby and as he grew, we enjoyed a happy carefree time.

In March 2010, when Max was nearly 8 months old, we had our first experience of his epilepsy. We were at home as usual when I realised his right leg was twitching rhythmically and on calling him, rushed over and saw his eyes had rolled back and he seemed to be having some sort of fit.  I immediately called 999.
Once at the hospital, and after a period when Max seemed ok, he then went into status epilepticus and was rushed through to A&E. He was given medicines to try and stop the seizures and then went into cardiac arrest.  Fortunately, the medics brought him round. Although his legs were still twitching for about half an hour or more after the medicines were administered.
After five days in hospital, a CT scan, 24-hour monitoring and a lumber puncture for meningitis, it was thought he had a severe reaction to a virus. (One of his friends was hospitalised the same weekend with a virus and was fine within 48 hours, of course with Max it was a different story.)
As background, Max’s father had had a childhood epilepsy from the ages of 3-7years and was given medication. Fortunately, he outgrew the epilepsy, probably genetic epilepsy with febrile seizures (GEFS).

After this point we hoped Max would be fine, but sadly we began to see clusters of seizures, usually febrile and linked to teething, a virus or cold. Twice he aspirated and ended up with Pneumonia, which of course really did not help – I used to wonder how such a little boy could cope which such an awful illness and so many seizures.

Max had been on the new combination for 10 weeks with only one or two short seizures, we thought we had made a breakthrough.  It may have helped that he was getting bigger and his immune system getting more robust.  We had discussed with his leading medic that we may move to a ‘next stage’ drug and we had also discussed prescribing with his GP and Consultant an antibiotic for the next winter, as when on antibiotics he always seemed to be so much better, it was as if he needed the boost for his immunity.  The medics at this stage were fairly sure we were dealing with a form of Dravet Syndrome.

I must stress that Max was like any other child most of the time, he was energetic, happy and very into everything. He enjoyed going to nursery one day a week and loved playing with his little group of friends and family.  Max really was a delightful child – he was slow to walk unaided and with hindsight I wonder whether the drugs he was on compromised his walking.

So, my life since Max was born in August 2009, up to the 21 June 2011 - was all about him, an energetic, happy toddler who really enjoyed everything but with a sinister illness.

From 8 months to 22.5 months Max had several critical hospital stays, but was not considered to have a fatal illness, and on 21 June when Max died tragically in his sleep due to we believed to be a heart arrhythmia, associated with Dravet syndrome. The medical teams were as horrified and at a loss as we were.  I was completely shell shocked and lost.

On the 21 June, once 999 was dialled, Max was airlifted to a hospital unknown to us, and so we were in an unfamiliar setting, although I admit not a lot was registering at the time.  My dull memory is of literally screaming at the injustice of this terrible condition finally beating us!  Although, we had an elongated medical history for Max, many hospital stays and a well-documented medical file, a thorough process of sudden death proceeded immediately.   It was very disconcerting to find the jurisdiction of my son was now under the local coroner, and after going through everything in detail with the medics and specialist death team, we (my parents and I) were taken home, in absolute shock at the day’s events.  My overriding feeling is that we should have been taken to Max’s known hospital, where we knew the staff and they have a specialist team who step in to support families with the death of a child.

Max’s postmortem genetics test confirmed a mutation in the SCN1A gene: a childhood Epilepsy condition known as Dravet Syndrome, this is a spectrum disorder and Max is thought to be about in the middle with GEFS+ (Generalised Epilepsy with Febrile Seizures plus).  Interestingly Max had a point mutation never seen before.  Dealing with a critical illness in your child, especially as a single parent was, when I look back, fairly terrifying at times.  Your vigilance in a child with Max’s condition is constant. Medicines must be given on time daily, and you are always watching for signs of being unwell and any sort of temperature.

After Max died, I was able to have some 1:1 counselling which really helped me understand it was not my fault, as I felt I was responsible as his Mother and was not upstairs by his side when he stopped breathing.  I was downstairs mopping the kitchen floor of all things, while he had his nap.
It is absolutely essential to be able to continue to talk about Max generally as my son, the events surrounding his death and particularly the aftereffects, I believe have been crucial to my mental state, and none of us want to be in this boat.
Locally, we have a Child Bereavement group attached to our local hospital, and I have found knowing the closeness of other parents who have lost their most precious children over the years, does bring some solace to this unimaginable pain and grief we journey on. And we above all understand the need to talk about our children, even though they are not here, but ahead of us.
SUDEP Action also has a great support network in place to help those bereaved by an epilepsy related family death and these services are so valuable.

I believe both Max’s and my legacy is to make a difference to children and families living with epilepsy and to that end we have spent the last 10 years fundraising and creating awareness as ‘TeamMAX’ (friends and family of Max).

Our initial aim was to fund a research grant into SUDEP (Sudden Unexpected Death in Epilepsy) in relation to Dravet Syndrome and finding perhaps ‘a trigger’ or pattern. Often with Dravet Syndrome, the brain seems to ‘trip out’ whilst asleep and as the child / adult is ‘on auto-pilot’ the brain and heart cannot seem to communicate, and a heart arrhythmia can occur.  (This fundraising was my saviour, Max transformed in a way, I suppose.)

I am delighted that we were able to co-fund a study into sleep monitoring of children with Dravet syndrome.  To date ‘TeamMAX’ has raised over £60,000 benefitting the research above and supporting a range or epilepsy organisations. All creating valuable awareness for Epilepsy along the way.  This year we again have a challenge to celebrate the 10th year of Max’s death on 21 June 2021 – we are taking park in the London Virtual Marathon on 3 October and so our journey continues.

Ten years on – I find I go about my life pretty well for the most part.
I have Max’s younger sister (7) and brother (6) who have kept me busy, a little less now they are both at school.
It’s trying to ‘find myself’ again which is a bit mind boggling.
I’ve been lost along the way somewhere.
The time we had 10 years ago seems a long time ago now… and yet some days it seems like it was yesterday.
It’s a funny thing grief and losing a child.
At the time, he was my world (my first husband and I split up when Max was a year old) so everything was magnified.  I love to talk about Max, but it is an odd thing when you are one short, it’s a natural thing for people to assume you have the two children that are seen and not to realise there is another life.
Had Max been here, he would be the eldest child, the one to do everything first and the big brother. It’s heart breaking to lose an heir, a life, theirs and yours. Your family tree is broken.

These days, it’s the anniversaries and milestones that bring your broken thoughts to heel and you. Yet again, track through the hidden dark depths of that early despair, and those life shattering memories which you live – Birthdays I can handle, somehow, they have to be happy days.
The day a beautiful perfect baby was born.
Death days are a trial. Getting through the day doing something on my own, like a beautiful walk or taking flowers down to the church is the only way I seem to be able to get through it.
Christmas is bittersweet as I am not buying gifts for three children, but two.
And Mother’s Day will forever be tricky – I’m absolutely cheered as a mother by my young children, who bring so much joy. But the nag in the back of your head on this day, and my birthday, is always present, and draining really – life is so unfair.

On most days thankfully, life is good. I love to be busy and do many things at home and work and with family and friends. I’m lucky, I have great friends and family.
But I miss not being able to talk about Max. What he might be up to now and what he is like these days.  Occasional triggers can bring upset and tears, but they are fewer and farer between. I think it will always be this way.

I miss my son terribly and life will never be the same again. We had a very special child for a very short time.  However, I believe both Max’s and my legacy is to make a difference to children and families living with epilepsy and to try and make a small but profound difference.

Thank you for reading our story,