Home › Matt
Back to stories page 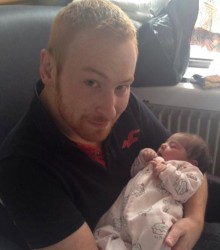 Matt was the most kind, caring, funny, thoughtful, wonderful person.

A week before he was 17, he had his first seizure. I called 999 and he was admitted to hospital. He had a barrage of tests and was released.

On the morning of his seventeenth birthday, I was saying goodbye to him at the door as he went off to college. We kissed, and he started walking up the path, but he stopped and looked up. I wondered what he was looking at, but then reality hit, and I realised he was starting to have another seizure. This was the day he got diagnosed with epilepsy. His 17th birthday. Just when life was about to begin, it was cruelly taken away.

For the next seventeen years, he had numerous seizures, at least once a week, injuring himself virtually every time. Epilepsy stole his life and his health. None of the drugs could control it. We tried them all.

Not once, did Matt ever complain, even though the injuries had taken their toll. He needed a total shoulder replacement due to breaking it so many times. He was is so much pain, all the time. He couldn’t have a shoulder operation as it was too dangerous, if he fell and hit his shoulder again.

He had even bitten off almost a third of his tongue. He had clenched his teeth so violently, that a lot of them were shattered. It’s all the other awful things that go alongside having epilepsy. He was so very brave.

Unfortunately, he wasn’t able to keep a job because of the uncontrolled seizures, so he threw himself into teaching himself web design from home. He felt safe there, and never felt safe going out. It didn’t stop him, and he did live his life the best he could.

I will be forever grateful, that the last words we said to each other were “I love you” and “I love you too”.

He’d been to have video telemetry in the hope of possible surgery.

We were waiting for his next appointment, for a more in-depth brainwave scan......

My heart is broken, completely and utterly, but I hope that donating all his organs to research, may help someone else, and may even go towards a cure?

As yet, the pathologist cannot find a cause, so another pathologist is onboard. I am assuming that because of this, SUDEP will be the reason.

I miss his beautiful smile, his infectious laugh and his nutty sense of humour. I miss hugging him and him hugging me back. He had the reddest hair and the greenest twinkly eyes. He was my leprechaun. I loved the bones of my boy.

He leaves his beautiful 5-year-old daughter, Lily, who looks so like him at that age, it’s amazing. I will always tell her about her daddy and how much he loved her.

His funeral was packed to the rafters, and strangely, I had never felt so loved as I did that day. Darling Lily was the one who got me through, along with my other son, and my brilliant friends. The sun shone, he had a Harley Davidson escort from a lot of his friends, something only given to a fellow biker, but they wanted to honour Matt even though he wasn’t a biker himself.

It was a sight to see and hear!

He made a difference and touched so many lives in his 34 years on earth. The lovely things that were said to me at the wake, made me happy. He was loved, totally, by everyone he ever met.

I like to think that he’s now looking after my mum and dad, wherever they may be.

To all of you who have lost anyone to this, I send my heartfelt love and understanding.

I hope that one day, ALL those with epilepsy can be seizure free, or better still, cured.

If you would like more information about epilepsy risks and safety, please see our webpages or contact us on [email protected]