Home › Maisie
Back to stories page 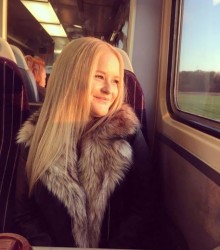 Maisie was a happy child and a happy young adult, it is simply impossible to summarise, in just a few words, such a short, yet fulfilled life. She was bright, kind, and intelligent and characterised by her smile and amazing hair, which always drew comment. Maisie was only 22 when she died in her sleep following a catastrophic seizure on 26th January 2019.

Maisie was the middle of three children with brothers Tom and Freddie either side of her. The three of them had a fantastic relationship as they grew up and this continued as they became adults. Maisie loved school, she ‘picked up’ some lovely friends along the way who remained in her life, even when their lives moved in different directions. She played football for Burnham Ramblers and at Leeds University where she spent three happy years studying politics and developing a circle of close and loyal friends. Over the years, Maisie attended many gigs, sporting events and festivals, keeping every ticket and wristband as a permanent record of how much she packed into her short life.

By the time of her funeral, we could see just how many friends she had ‘collected along the way' with the crematorium literally bursting at the seams, with so many people wanting to pay their respects to a young lady who was truly beautiful inside and out.

Maisie was genuinely interested and active in the political world, vigorously sharing her opinions and picketing people in the high streets of Essex to use their votes. She was much loved by her parents who enjoyed happy holidays with her in many locations; Northeast Greece being a particular favourite, which will forever hold an extra special place in our hearts. Maisie was the best daughter, granddaughter, sister, and niece that anyone could wish for.  She was also an involved and patient cousin, spending much time with her younger cousins and socialising with the older ones.

Her epilepsy started whilst she was at Leeds University, in the November of her first year (2016). The medical advice was that this was not unusual and there was a 50:50 chance of it reoccurring. She had a variety of tests which showed nothing untoward. A year later she had another seizure and was put on medication and given advice about how to manage the condition; protect your sleep, avoid stress, and take it easy if ‘partying’. We learnt that epilepsy is not an exact science and diagnosis is not straightforward.

After she graduated, the frequency of the seizures increased to quarterly and then, monthly, and fortnightly towards the end of her life. Maisie was seen by a consultant at Southend Hospital in December 2018, who changed the definition of her epilepsy slightly and recommended an EEG, which she had early in January 2019. Her father attended these consultations and heard first-hand Maisie explain to the consultant how the seizures were becoming more frequent. The consultant did not mention the risk of SUDEP, and we have subsequently and painfully learnt, that an increase in the frequency of the seizures can be a potential precursor to a SUDEP, especially for this age-group. The consultant advised us that there was a 1:1,000 chance of death through epilepsy which certainly focused our attention and Maisie made changes to her diet (for example, foods that slowly release energy), began an exercise regime, religiously took her medication (setting reminders on her phone, iPad and computer) and kept a diary of what she was eating and how she was feeling. This diary gave us an insight into how she was feeling in the weeks before her death and provided us with some comfort, with the knowledge that she was taking her condition seriously and doing all she could to follow seizure management advice.

Tragically, Maisie died at home in her sleep as the result of an epileptic seizure, whilst we were waiting for the results of the EEG. These results subsequently indicated a further slight change in the diagnosis.

For Maisie, sadly, this wasn’t enough, and we are left wondering why the professional medical advice fell short and why the first time that most people hear about the reality of SUDEP is when they have lost a loved one. Her symptoms of an increase in the frequency of seizures are classic warning signs of a potential SUDEP  (Maisie only ever had a dozen seizures) so we asked ourselves; Should she have been left to sleep alone? Should she have worn an alarm? What interventions could be made during a seizure? In hindsight, we simply didn’t know these were questions we should have asked.

Maisie is missed desperately by everyone who knew her. The 26th of January 2022 will be the third anniversary of the passing of our beautiful, happy, kind and loving girl. Her friends are having to learn, far too young, how to deal with the grief of losing a lively, passionate, and fun-loving friend.

All of us know that Maisie enriched our lives in so many ways and we are determined to ensure that through her loss, positive changes will happen. The Maisie Tothill Foundation has been set up in her memory by her family who are determined to make a difference to the lives of young people and their families by continuing to promote the causes that were so important to Maisie.

The Maisie Tothill Foundation has been supporting  SUDEP Action through fundraising and engaging with politicians to help make ‘that difference’.