Home › Liam
Back to stories page 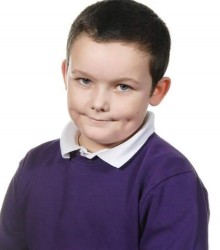 Liam was a very healthy baby. As he grew he reached all his milestones as expected and I had no worries about him at all. He was doing well at school, exceeding in all areas beautifully.

Then in May 2018, when he was six years old, I got a call from Liam’s school telling me he was unwell. When I arrived, he was vomiting but sat up in a chair. He was really vacant and his eyes kept drifting up to the right as if he was staring at something. I carried him to the car where his condition began to deteriorate. An ambulance was called but it was taking too long to come so we decided to drive him to the hospital ourselves as it was only around five minutes away. By the time we got there Liam was unconscious and jerking. I had never seen him do anything like this before so I had no idea what was happening. Liam was given medication and after around an hour the seizure stopped. Liam was given more medication and sent home a few days later.

We were given a follow-up appointment but the doctors said they didn't know why the seizure had occurred, and that we should keep an eye on Liam and let them know if he had any further episodes. He seemed OK and everything went back to normal but in March 2019 we were in the car when Liam suddenly became vacant again. I recognised the similarities to the first episode so we took him straight to hospital, where he vomited and fell unconscious. Once again, he was given anti-seizure medication and needed help with his breathing. After 45 minutes the seizure stopped. He was kept in hospital overnight but sent home the following day with antibiotics for a viral infection.

In July 2019 Liam had a follow-up appointment where we were told that he most likely had focal epilepsy and that a stronger MRI would be required before starting him on any medication. I asked if I could at least have rescue medication for him as my younger son had recently been diagnosed with epilepsy and given daily anti-seizure and rescue medication. Following the MRI, I rang to get Liam’s results and was told they weren't willing to treat or diagnose Liam because his seizures were ‘too few and far between’.

Liam had another seizure the following November which lasted two-and-a-half hours, he had to be intubated and his blood pressure dropped rapidly. The lack of oxygen to his brain caused it to swell. Liam never recovered and we had to give permission for his life support machine to be switched off. He passed away – with me and his Daddy by his side – at 5.10pm on the 24th of November 2019. He was seven years old.

I want to share Liam’s story to raise awareness of the seriousness of epilepsy – so people know that if you feel something should be done, you have to push and persevere. Today, 24th February 2022, Liam should be 10 years old. He is missed terribly, not just today but every single second of every single day.