Home › Kathryn
Back to stories page 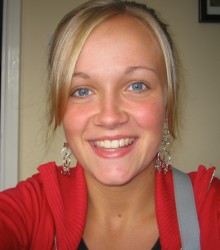 Everyone who knew Kathryn was captivated by her personality, intelligence, charm and beauty.  She was loved by everyone; a treasured daughter, sister, granddaughter, auntie and friend.  She was on loan from the angels and they wanted her back.

Kathryn was the youngest of our four daughters.  She had definitely been first in line for good looks. She was stunning, with beautiful blue eyes and a smile to light up a room, but she also had an inner beauty – a lovely, gentle way about her. She was very fit and healthy.  Kathryn was also very bright and sailed through her GCSE’s.

She was wise beyond her tender years – the first person you’d turn to in a crisis. But she was also the most amazing fun – the first to grab the karaoke microphone or hit the dance floor. Her favourite song was ‘Footloose’ and she knew every step of the routine. “Come on… sing like nobody’s listening, dance like nobody’s watching,” she’d laugh, encouraging us to let our hair down.

Kathryn’s first seizure occurred during sleep.  We thought it was a nightmare, comforted her and put her back to bed.  It wasn’t until she had a seizure at her friend’s house at night whilst asleep that we thought anything was untoward.

We took Kathryn to the GP and she was later seen by a neurologist who diagnosed night time epilepsy.  Kathryn refused anti-epileptic medication because she thought the drugs may impair her thinking and she had her A levels coming up.  We did not question her decision and Kathryn did not think her seizures were a big deal.  We were totally baffled by the diagnosis because there was no family history of seizures.

Kathryn also sailed through her A levels and achieved her place at university.  To finance her studies she worked part-time for one of the UK’s largest retailers.  Everything was going well for Kathryn.

Kathryn had just finished her first term at university when she died suddenly and unexpectedly at home during the night, two days before Christmas.   We were stunned when a post mortem revealed Kathryn had died of a syndrome called SUDEP – Sudden Unexpected Death due to Epilepsy. We’d never even heard of it before.

SUDEP Action (formerly Epilepsy Bereaved) have been so helpful and we are determined to improve awareness of SUDEP and raise funds for research to prevent SUDEP in Kathryn’s memory.