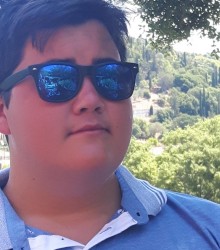 Jon was larger than life in every way; he loved people, loved life and always looked for the good in everyone. He had a very dry sense of humour, sometimes close to the knuckle but funny just the same.  He was full of “useless” information and often came home with the phrase “did you know…” followed by a random, yet interesting fact he had learned.  He took part in many sports including, Sailing, SCUBA Diving, Power Boat Handling and Skiing, he also took part in shooting competitions for Scouts.  He loved rugby and was a ferocious front row player; he loved the game on and off the pitch and could often be found in his local pub supporting England during international games.

He achieved his Chief Scouts Gold Award and continued to help others and develop his skills through the Duke of Edinburgh scheme, he achieved his D of E Gold Award in 2018. Jon hated injustice and unfairness and was a champion to those who needed support; he touched many lives especially through his volunteer work with Duke of Edinburgh. He volunteered at a Tag Rugby Club, worked with children who had suffered trauma and looked out for those who struggled on a day to day basis.

Jon always wanted to be an engineer, and planned to follow his brother into the Navy, unfortunately he was diagnosed with generalised epilepsy at the age of 16, so this was not possible, instead he worked hard and was offered an apprenticeship in Engineering Management within the Civil Service, he moved to Bristol in September 2018 to start his new career.

Jon had never had seizures until he was 16, then we noticed episodes when he lost control of his gross motor skills; he dropped things, went floppy and tended to drool. He had EEG tests, but nothing seemed wrong until 22 November 2016, when he collapsed twice in college, followed by three tonic-clonic seizures.

Further tests showed he had Generalised Epilepsy and he was prescribed medication immediately, and then later a combination of medication. He never had another tonic-clonic seizure but did have tonic seizures.  He regularly attended appointments with the specialist care team and his consultant. Jonathon had no recollection of the seizures he’d had, so it was difficult to monitor them, as we could only report the ones we had witnessed. Although, I stated that I was concerned that we couldn’t know that he was on the correct medication, I was reassured by the team that they could only medicate the seizures we knew about. His last appointment with a consultant was 2 days before he died.

He died on 16 June, Father’s Day. I found him in bed. The post mortem showed no other cause of death. We have since been informed by the coroner that Jon’s death was attributed to epilepsy, SUDEP. Our family had never heard of Sudden Unexpected Death in Epilepsy, we had absolutely no idea that Jon could die from epilepsy.

The day I found Jon changed my life forever.

I felt like I was walking around in a bad dream, it couldn’t be real, I was laughing with him only hours before. His dad fought to bring him back, I was destroyed, devastated, lost, there was a time I felt I couldn’t carry on. I wish I had been told about the risk of sudden death, we may have been able to prevent his death, but I wasn’t given that opportunity, we weren’t given the choice. I would have been more insistent on finding some way of monitoring his seizures and so be sure that he was on the correct medication.

I have tried to focus on changing things for other families and am determined to raise awareness of SUDEP. I believe everyone should be told at the point of diagnosis and have discussed my concerns with our local MP. I am involved in many fundraising events and am being supported by our local community. Jon’s memory will live on and as in life I hope that he can make a difference to others in death.