Home › Johdi
Back to stories page 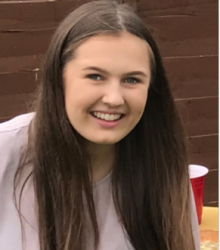 She had febrile seizures as a baby and after some tests she was discharged without diagnosis and sent on to live a relatively normal, fun life.  When she was 16, she had her first witnessed tonic-clonic seizure and several more in the time we waited for referral and diagnosis, which was JME (juvenile myoclonic epilepsy).

Johdi was started on medication and we both had alarms on our phones to remind us of med time!  We were a great team, although I always thought she coped better than I did.  I worried every time she went out and naively, because her seizures only seemed to occur between 1.30 a.m. and 6.30 a.m. I always thought "well at least she's safe in bed" - little did I know.

Johdi was having between two and four seizures most weeks.  We only had one six-week period where she was seizure-free, but all through this Johdi kept that beautiful smile and infectious laughter going.

She didn't manage to take all of her GCSEs because of her seizures.  We decided sixth form was the best option, close to home. She felt safe there and their care for her was amazing.  In the sixth form common room there is a picture of Johdi donated by our family in her memory and an award for overcoming adversity was named "The Johdi Russell Award".

Johdi was having many seizures at this time and in the summer of 2017 had a triple seizure resulting in a head trauma and broken tooth. She didn't come out of the seizure as she usually did, and she was taken to A & E.  Sadly, after treatment, she was discharged with no follow up, even though we asked for this.

After this, Johdi decided to start a college course to do level 3 Childcare, ultimately to work with autistic children, which had always been her dream.  During her school years, she was helper to an autistic boy and Johdi was his special person, the only one who was able to calm him. She got a placement at our local primary school and once her nerves disappeared, she made a big group of friends and became a loved member of the tutor group.

Johdi was so happy and managed to stay seizure-free until the morning of 5 October 2017.

The day before had been my birthday and we as a family had gone out for a meal in the evening, all 19 of us.  We had a great time and the last thing every member of the family said to Johdi was "I love you" and her to them. How lucky they all feel to have that as a lasting memory.  Afterwards, the four of us came home and carried on singing and dancing, to our signature tune, Wilson Phillips "Hold On" and our dance, the Macarena!

Johdi went off to bed. I had a feeling she was not well; we woke the next morning to find she had had a seizure. We got her back to bed and a few hours later we found her lying face down in her bed.  My beautiful, young, vibrant, happy, kind (I could go on) girl was dead.

We were taken to hospital in the ambulance and the whole way I was stroking her face and kissing her forehead, all the time thinking, how has my girl just died for no reason.

I was told about SUDEP for the first time at the hospital.  They said we hadn't been told before because they didn't want to scare us and "Johdi wasn't a high risk anyway".  But we know now that Johdi's tonic-clonic seizures and nocturnal seizures placed her at the highest risk.

I have worked closely with the hospital since Johdi's death to make the changes that I felt would have made a difference in her care, including SUDEP risk training for staff.  I got a call from them in November 2020 to confirm that all the changes were now in place - this was just amazing for me and makes me feel that Johdi's sad and preventable death has meaning.

I am not stopping there though and am campaigning to positively influence change nationally.  I am working with SUDEP Action to do this and will do so in Johdi's name.