Home › Jenny
Back to stories page 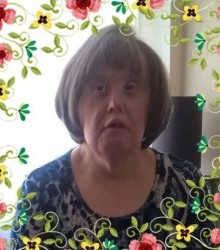 Our dear sweet Jenny, affectionately known as Jenny Wren.  Jenny was a lady full of life, she was funny, loving and so infectious, the world was a better place when she was around.  She completed us in every way.  She had Down Syndrome, but that did not define her, it was her zest for life and her kindness.  She would have you giggling in no time at her antics and her infectious giggle. Not one bad bone in her body.  She lived for her family, her Zumba/dance, Abba, apple pie, cake, coffee, cheese and pickle sandwiches, so much more and the colour pink!  She loved to help people and taught us Makaton over the years, some of it we had to get clarity on, but we did have our own sign language too. She was a terrible flirt and extrovert. One of her many catch phrases was “Watch me”. She was our Dancing Queen.

When she gained her angel wings in May 2017, it was a devastating shock, none of us were prepared for it, certainly not ready to let her go.  We had so many plans and as she would say “Just us” now.  She was 53 years of age and one month.  It had been a very sad time, losing our parents, dad just six weeks before and mum the previous year, but she had transitioned well and coped.  Not a day went by when she did not make us laugh, even on sad days.  So, to lose her, is something none of us, especially me, will ever get over.  Jenny was not only my little sister but had become like a daughter to me and my husband Paul.  We had cared for her just short of six years, five and half year’s full time. Just wish it had been much longer.

We thought that Jenny was on a different journey to what was to happen. In the last two years of her life, things did start to change.  We think it started after she had a nasty fall whilst out with her Carers at the Day Centre, she had hit her head and lost two teeth, but we had been assured she had been checked by a passing paramedic!  Jenny was happy and not upset when she came home.  We did have her checked out ourselves to make sure. However, after that, we noticed she slept more, going into deep sleeps, sometimes taking us up to ten minutes to wake her.  It did worry me as I imagined one day going into her room and she would have passed in her sleep. But that was a nightmare, I did not want to think about, and I put that down to my mind working overtime.  Never had I heard of SUDEP or given a thought to the fact it could be Epilepsy. There were other symptoms as well including, immense thirst, swallowing problems and losing memories and words, all under investigation.  However, before this, she had been in good health, although she had an underactive thyroid and an iron deficiency.  Due to her breathing when a sleep, we did suspect a form of sleep apnoea, but as we knew she would not cope with a cpap (continuous positive airway pressure) mask, it was not fully investigated.

It is too painful to tell you about each one of the big grand mal seizures we saw, starting on her 53rd birthday. But we suspect looking back now, that she might have been having silent seizures which we put down to tiredness and her going into her own little world, which she did from time to time.

The last seizure, which was the fatal one, was in front of me on 12th May 2017 at 6.00pm. She yelled out like she had done before, but the jerking was so violent I could not stop her falling to the floor in time to save her, she had been sat at the dining room table. They tell us that she had already gone by the time she hit the floor and there was nothing we could have done. I still don’t believe that and continue to be racked with guilt, and ‘if only’, same as my husband.  Both my husband Paul, and the paramedics gave her CPR for near on thirty minutes, and I knew that for every second more than the initial three minutes, that Jen would not come back as our sweet angel - that we were losing her. Her heart did restart, and she spent four days in ICU.  But we were to lose her again.

It took ninety seconds, after her life support was switched off, to see her slip away again and go over her rainbow, I was holding her hand.  She was spared from having to have a Post Mortem thankfully, as the sweet she had been eating at the start of the seizure was found on the floor by the paramedic and they were happy with what the hospital had said in their reports.

We did go to see her a couple of days later, as I could not believe she had gone.  We were warned she looked different and when I saw her, I knew what they might had meant. What had happened leading up to that last seizure and why she was having constant headaches and nose bleeds months before - these had been dismissed previously.

In the months that followed Jenny Wren’s passing, all of us have been left completely devastated, it is not fair, never right a life should be cut so soon and so quickly.  There has been a lot of emotion and feelings of guilt especially for myself and my husband.  Our brother, who was Jen’s twin, although devastated, did not have the relationship we had with her.  She was our life.  The whole family try to carry on, but acutely aware she is not with us, especially at birthday celebrations and Christmas, she was the icing on the cake on these occasions.  All our plans have just vanished, because she was our life.  If she knew we were sad, it would worry her, and she could also be very cynical. But most of all she would not want us to be sad, but the grief has been unbearable. It has affected our health and wellbeing.  Both my husband and I have been and are still having counselling.

In her memory, we have set up a fundraising page, so we can raise money in her memory and where we can go and tell our stories about her.  We will continue to raise money and would like to get more involved in raising awareness of how devastating epilepsy and SUDEP can be.  Jenny loved to help people, so we want to do this in her honour and keep her legacy alive.

Our plan is to be able to give a little back by eventually hosting a coffee morning.  Jenny’s idea of perfection, a quick coffee and a little chat.