Home › Jared
Back to stories page 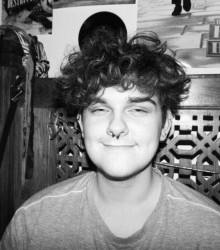 An only child, he had a very close relationship with me, his Mum. Jared had lots of friends, loved life and always looked for the good in everyone. He was the go-to person if anyone had problems. Everyone who knew Jared adored him because he was a laid-back kind of guy with a dry sense of humour. He was hilarious without even trying to be. He loved stand-up comedy and making people laugh. Jared was quirky, he dressed how he wanted to dress, and loved nothing more than trawling around the charity shops for a bargain. He loved piercings too, and one of his goals in life was to have tattoos and grow a beard. He loved music and went to many concerts and festivals with his friends. Marvel and fantasy films were another passion, such as The Lord of the Rings, The Matrix and Avatar.  He loved nothing more than a good conspiracy story. Jared did very well educationally and achieved all of his GCSEs and a BTEC Level Three in science at college.  He wanted to be a radiologist and began studying for a degree in biochemistry.

Jared was 17 when he developed epilepsy, we don’t know why. I first noticed the absence seizures, then the complex partial seizures and shortly afterwards he had his first tonic-clonic seizure at college. He underwent lots of scans and tests but they showed no abnormalities. His epilepsy diagnosis was a shock to us all but, naively, we thought he would be OK with medication.  Jared tried all kinds of different medications and different combinations too, but they did not work and his seizures continued. He had no warning or awareness of when he was going to have a seizure, he had about three tonic-clonic seizures a month as well as multiple complex partial seizures and absence seizures. The seizures used to exhaust him and it sometimes took him days to recover.  But Jared would always pick himself up and often said he would not let epilepsy control his life. His amazing friends stuck by him and all learnt what do if he had a seizure. We never imagined how epilepsy would affect his life.  Every aspect of his life had to be planned, including where he went and who with, and he had to stick to a strict medication regime and consider potential dangers that most people would not even think about, such as drinking alcohol, cooking, crossing roads, and moving furniture with sharp corners.

As the years passed, we noticed that Jared’s short-term memory was slowly declining, he physically suffered with every tonic-clonic seizure and his shoulder and his knee dislocated. Even then he got back up and tried to live the best life he possibly could. We knew about SUDEP but never in a million years did we think it would happen to him.

Jared was found dead in his bed on 24th August 2021 – a week before his 21st birthday. His death devasted many people and family, friends and others from the local community laid flowers under a tree in the local park where he often used to sit with his friends. We did not have a funeral for Jared, we held a celebration of life event. Over 200 people attended. We played his favourite songs and gave out his favourite sweets and forget-me-not  seeds. We made a memory tree and to end the celebration we let off 200 purple balloons. Purple was his favourite colour.

Epilepsy took Jared but we fight on. When Jared died we raised £8,600 for epilepsy research and we will continue to raise money in his memory.