Home › Hope
Back to stories page 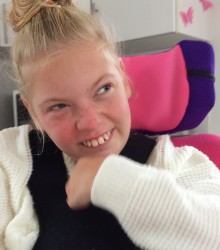 On the day that Hope passed away, Hope was the best that she been for quite some time.

Hope embraced life and all that came with it, she was loved and continues to be loved beyond words. Hope was the happiest little girl, despite her difficulties she would smile and giggle, her warmth was endearing, she'd shine.

People would always stop and chat whilst we were out walking. They'd see this beautiful little girl passing by in her pink wheelchair, immaculately dressed, as Hope would love to feel nice and feel proud.

Hope enjoyed being outdoors. Although, the two of us took great pleasure from being in the comfort of our home, our adapted bungalow, named ' Hope's house'.

From birth, Hope presented with unusual movements and low tone. The sensation I described in my tummy whilst carrying Hope during pregnancy, were consistent with the movements Hope was experiencing at birth. At four days old, the doctors explained that Hope had been having intrauterine seizures whilst in the womb and was now suffering with neonatal seizures. Hope was started on medication and the movements settled down.

Hope's development was delayed, and the term ‘global developmental delay’ was used. However, with a lot of support and input, Hope was making incredible progress.

At the age of two years old, Hope suffered the first of multiple strokes.

Then over the years, Hope's epilepsy worsened as a result of the damage to Hope's brain.

The doctors were incredible, committing so much time and tried so hard to help me gain some control of Hope's seizures, but medication changes made little difference.

Yet, there were periods of time where Hope was thriving, rarely seizure free but they were not hindering Hope.

Hope loved life and life loved her, despite when Hope was struggling, she would still be truly living.

Hope would defy all probabilities when she was poorly. Even when the professionals would be extremely concerned about Hope, each time she would bounce back.

Hope and I spent every moment together, it was and always will be an honour and a privilege to be Hope's Mummy.

In January 2019, after many years of diagnostic investigations as a little girl, which had not given anything in terms of a diagnosis, a mutation in one of Hope's genes was found (gene Cacna1a) This mutation was found following some blood tests taken from the 100,000-genome project. The symptoms of this gene mutation would be, most commonly epilepsy and hemiplegic migraine.

Hope began to experience 'flurries' of seizures, in and out of activity for hours.

I was reassured that although it was not pleasant for her, Hope's seizures were not compromising to her breathing, or heartrate, and would not be causing long-term effects.

Sadly, the days leading up to Hope’s passing, she was the best that she had been in months. On that very day (2 May 2019) Hope had been seizure free, and had received a 'well done' certificate from school for her learning.

After school, Hope's occupational therapist called in on her way home and was thrilled to see Hope so well.

My girl and I had a beautiful evening out, we were singing, chatting, walking and we called in at our favourite cafe.  When we arrived home, Hope had a pamper bath with all her favourite smells, she was so relaxed, so content and so happy.

My mum often helped me with Hope's bedtime routine, and when we hoisted Hope into bed, she was full of fun and mischief, Hope was wide awake despite it getting late.

My mother left, and I tucked Hope in as she is as ready to settle.

I told Hope that I loved her, as I always did, and said I'd be back in to see her shortly.

I left the room and as always went back in to check Hope an hour later.

The moment I walked in to Hope's room I knew, Hope had fallen asleep, and had passed away.

That feeling is one that will never leave me, nor will my beautiful girl.

Our bond is like something I have never known, a love so deep I didn't know possible.

The cause of Hope's death was SUDEP.

I had not heard of SUDEP before, a meeting with Hope's doctors afterwards explained what this means, and I have been given so much information and support from the team at SUDEP Action.

Hope's scans and toxicology reports came back as normal and no other cause could be found.

I did not think I could survive a life without Hope.

But I do need to honour Hope and make her proud.

I've learnt so much from Hope, she has gifted me with her strength, courage and bravery.

Hope's garden where she is laid to rest, is full of beautiful pink roses and little keepsakes. There is also beautiful memorial across the road from Hope's bedroom at home.

Hope is missed by so many and will be remembered forever.