Home › Hayden
Back to stories page 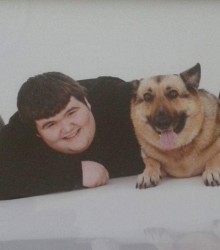 My son was my second child. A much wanted younger brother to Georgina. Born in England, he grew up in Wales and considered himself to be a Welsh man.

Hayden had a difficult start, he was born with hydronephrosis that required surgery. He had his first seizure at six months old, but it was put down to febrile convulsions. Many seizures later, at the age of eleven, he was finally diagnosed with epilepsy and started on medication. No medication made a difference to his seizures. But one medication changed his personality. He went from a caring, loving, accidentally funny and clumsy young man to a moody angry aggressive person. We wasted a year of his life on that medication, not seeing the change in him as a result of the pills, but as him being at fault. I regret that.

He had a fantastic imagination making up stories and he became a devoted big brother to his little sister when she came along. He loved history and was an avid reader. He had a dog, Pepper. She and he were made for each other. She loved him and he loved her. She died two months before Hayden. Hayden had dreams of seeing the world and writing a book. He wanted to be a librarian, or history teacher. Epilepsy took over his life, seizures increased with puberty, to a point that he would have on average three a fortnight. He also had complex partial seizures and absences.

Hayden became isolated when his epilepsy resulted in him being asked to leave his course at college. So many people have said how highly thought of he was. It's hard that he never knew. Hayden joined a group of volunteers taking dogs to care homes. He used his grandparent’s dog for this as Pepper was slowing down. He felt so guilty every time he left her behind and would bring her treats to make up for it. He took her everywhere he could, and she, though never officially trained, stayed by his side during seizures and would bark to get attention if she thought no one else had noticed. She gave him confidence to go out without anyone else.

His last day was spent making a fuss of me as it was my birthday. He was last to bed that night and it is unclear whether he made it upstairs at all. He died downstairs alone. I found him the following day. He was face down on the floor, it was clear he had had a seizure. My daughter and I tried to save him knowing really that it was too late. The first time I heard SUDEP mentioned was by one of the first responders who said to his colleague just that word, and a look between them. Hayden was twenty years old and had never been told he was at risk, or that SUDEP was a thing. This needs to change.

During his childhood, he was seen by a paediatrician only, who never prioritised his epilepsy. Time was wasted that should have been spent trying to find an effective treatment, wasted talking about his weight and his suspected autistic behaviours. Epilepsy was always the last thing mentioned at the end of the appointment. It was given no importance, and no action plan was ever discussed. Once he moved to adult services and met his neurologist, we finally felt like he had a chance of getting it under control. He simply didn't have enough time.

Hayden's death has been attributed to SUDEP. We set up a Much Loved memorial page for Hayden, raising money for SUDEP research, Epilepsy Action and the Muir Maxwell trust. The last charity gave Hayden a bed alarm when he started having night-time seizures. Because of his relationship with his dog Pepper, I've decided to sponsor a dog through Support Dogs charity, to be trained as a support for someone with epilepsy. I did it to mark his birthday, and plan to do it every year.

If you would like more information about epilepsy risks, epilepsy safety devices, please see our webpages or contact us on [email protected]