Home › Hannah
Back to stories page 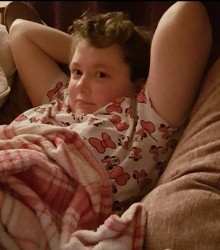 My daughter, Hannah Louise was born 26th May 1992.  She weighed just 4lbs 12.6ozs, even though the pregnancy had no problems, she was so tiny. Hannah was my eldest daughter.

As she grew, she could talk and was toilet trained.  Her seizures were around 5 a month.  When Hannah was nine, her speech stopped, and she went back into nappies and her seizures increased.  Hannah was diagnosed with Lennox Gastaut Syndrome, a severe, rare form of epilepsy.  I was told when she was born, her brain cells went in the wrong place.

When Hannah was in her late teens, her seizures became more frequent and more violent.  They would be so bad; her lips would turn blue.  She often had one after another, after another, and she would sleep for hours afterwards.

Hannah went to an amazing school, which specialised in epilepsy.  She loved to go swimming, watch Barney, rip up catalogue and suck tea towels.  She loved her food, would eat anything.

The week before it happened, her seizures were so bad and more frequent, sometimes 10 to 20 a day.

The night before, she had come back from respite, and she had been having seizures all day at school.  When she came home she had 5 in a row, she was so sleepy, I put her to bed early and kept watch on the camera.  Through the night I looked at the camera and she looked as though she was sleeping.  In the morning, I kept watch through the camera and let her have a lie in.  I took her breakfast through to her and pulled the curtains. After her breakfast, I was going to bathe her and watch her favourite Barney DVD together. Then, I went to wake her and get her ready.

Hannah was face down in her pillow, her face had gone a horrible colour. I turned her over and her last breath escaped.  They said she had a seizure and had suffocated.  It would have happened about 2 or 3am.

The funeral was a month later, everyone wore purple and wrote on her coffin and placed Barney stickers on it.

Hannah’s birthday is in May. Last year we went to Southend and threw purple roses in the sea and will do so every year.

I miss Hannah so much, she was my world.

It's so hard with her gone.

I have her ashes in a purple urn with butterflies on, which I keep in my bedroom.  I talk to her throughout the day.  My youngest daughter and I had tattoos of a dinosaur and Hannah on our wrists.

It's been over a year now, and I still can't believe she's not here.

I have a young son, who helps me get through, but I miss Hannah every second.