Home › Georgie
Back to stories page 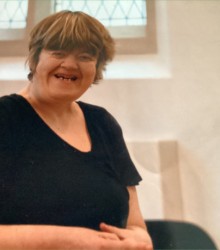 Our daughter Georgie was born in 1980.

It became immediately obvious to us that she had health problems, as she was in and out of hospital over the months that followed. By the time she 14-months old, the paediatrician let us know, in no uncertain terms, that she also had learning disabilities. He even used the word ‘retarded’ several times, and told us that it would be better for us if we put her into care. I thought such attitudes from the medical profession had been abandoned decades before!

Georgie grew up to be a happy, loving little girl, and although she didn't reach her milestones easily, it did not deter her from enjoying her life.

Her brother Eddie was born in 1986 and she took him under her wing and enjoyed pushing him around in her doll's pushchair. They became inseparable and as he grew up he was very protective of her.

Georgie had her first grand mal seizure at the age of 14. I had never witnessed a seizure before and immediately called an ambulance. She went to hospital and an appointment was made to see a neurologist. She had several seizures in the years that followed and when she was 23, we decided that we should find a residential care setting that would help her to mature and learn.

We found a lovely place not too far from our home. Georgie thrived there, but came home every weekend and various holidays. Christmas was her favourite time, as we would take her to see her Auntie and Uncle, who spoilt her with presents and her favourite sweets.

Over the years her seizures seemed to calm down, but during the first Covid lockdown we were told that if we brought her home to stay with us she would not be able to go back to the home until after the lockdown had ended. We decided that it would be best for her to stay at the home as she would have more things to do and be with her friends. We Face Timed often and spoke on the phone, but it's not the same as seeing someone in person. We resumed weekends at home when we were able to, but I think the lockdown caused her a lot of anxiety as she didn't understand why she was being kept away from us.

When we resumed home visits, she started to have more seizures. I told the staff about these when we took her back, but I don't think they recorded them. I got the impression that they did not believe me as they hadn't seen the seizures for themselves.

She did not have an epilepsy review or a SUDEP risk assessment, and I feel that I should have insisted on this, as her death may have been avoided if they had taken notice of what I had said. They told me that on the night she passed away at the home, they were not expecting her to have a seizure. They were supposed to be the experts and they should have expected it.

We were due to pick her up for a home visit on the day she died. There is going to be an inquest this year and we are hoping that recommendations will be made to her care home, to improve their staff training and not let this happen to any other residents.

Her death has left a huge void in the lives of our whole family. She was only 41 years old, but she will always be our lovely, funny, loving little girl.