Home › Felix
Back to stories page 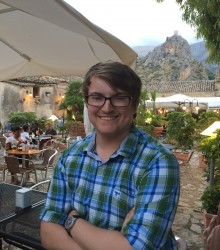 My son Felix was a beautiful, creative, gentle and loving young man. I still can’t believe he is no longer with us.

Felix was 20, and in his first year at university, studying film and visual arts. He had really started to come out his shell.  He was acting, taking part in student productions, and getting involved in university life. This was after a difficult time in his teens when his epilepsy really affected his confidence.

His epilepsy had started when he was 13 and fell out of bed one night. He started having nocturnal seizures regularly, and then daytime ones as well. He started taking medication, but his epilepsy was never very well controlled. He was amazing with it though. He never complained, or said “why me?”

In March 2017 I was heading up to Leicester to see Felix in a musical, The Producers. I arrived at our meeting place, in the centre of town near the university theatre. He wasn’t there. I waited for a while, and then phoned him but there was no reply.  I went to the theatre where I knew they were rehearsing and spoke to some students who told me they hadn’t seen Felix for a couple of days and had been trying to track him down.

At this news, I started to feel sick. Deep down I knew something was terribly wrong.  I tried to remain calm. We phoned his hall of residence and they said they would go and knock on his door and call me back.  I waited a while, and there was no phone call. I decided to drive to the halls and when I got there, I saw an ambulance outside.

It’s hard to describe how I felt at this point. I was taken over by a total, animal fear. I ran out of the car to Felix’s building where my way was blocked by security staff. A man was standing nearby talking on his mobile, and a paramedic was also there. I tried to push past them, and I was prevented from going in. No one would tell me what was going on. Eventually a paramedic emerged from the building and said to me: “I’m very sorry. He’s passed over.”

People talk about turning points in their life, well this was like a spinning spiral into which I fell, sucking me down and down into a black abyss of loss, as everything I thought I knew whirled around me in a confusing fog, throwing me into a new world without Felix in it.

My life is now about before and after.  Before – when things were normal and Felix was alive, and after – after he died. Our family has been devastated by his senseless death. We have found strength and support together, but our lives are so much poorer without him.

We have had to learn how to carry on. Our grief is collective, as a family, but of course it is also individual.  We have to find our own ways of dealing with his death. Personally, I like to write letters to Felix. It is a way of ‘talking’ to him, keeping the dialogue going, however strange that seems. Because the reality is, that although he is no longer physically with us, he is still so present in our lives, and always will be. Death does not change that.  So, doing things that somehow connect to him is helpful. As well as writing to him, I also made a quilt out of his clothes, which rests on our bed. And there are certain places I like to walk, where I am reminded of him. 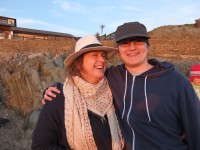 I want to end with some memories of Felix.  I remember him as a hilarious toddler with his pudding bowl blonde haircut, playing inside a huge cardboard box, always up for a laugh and giggle. I remember him as a teenager, with his head always in a book.  I remember him as a young man, excited as he moved into his university accommodation, looking forward to making friends and having new experiences.  I remember the last time I saw him, his smiling face through a dirty train window, as he headed off back to college after the Christmas break.

Sophie’s memoir about losing Felix: The Green Hill: Letters to a Son, is crowdfunding with Unbound. You can find out more, and support the project, here: https://unbound.com/books/thegreenhill/