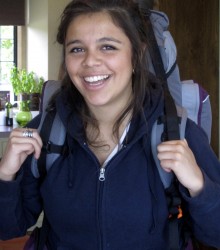 My daughter Emily was a bright, pretty, sporty, funny, popular and mischievous girl. I always thought she’d cause me trouble but I never imagined this.

When Emily was fourteen she telephoned me from school and said she’d had a ‘déjà vu’ whilst walking back from lunch and it had been frightening. I had no idea what she was talking about and she couldn’t really explain it so I said ‘there there never mind’ and we talked about other things.

A few weeks later she told me that she had had another ‘déjà vu’ in the middle of a hockey match and had been disorientated. Again it was a frightening experience. I asked if she meant that she felt she been in a place before or was seeing something she’d seen before but that didn’t quite seem to fit her experience but she couldn’t describe exactly what she had felt. We called it her ‘funny turn’.

Emily came home for the Christmas holidays and appeared perfectly normal and we all forgot all about her ‘funny turns’.

On returning to school in January she had a further two episodes of ‘déjà vu’ and then shortly afterwards she had her first major seizure in the early hours of the morning, in her bed in the dormitory. Her thrashing about woke up her friends who called for help. Emily slept the whole of that day and remembered nothing of the episode.

At this point we took her to see her GP and she was referred to a consultant paediatric neurologist. Emily had two further seizures about a month apart, always in the early hours while she slept, and was put on medication. The consultant said there was a reasonable chance that she would grow out of her epilepsy and that after two years we would wean her off the tablets and see what happened.

Over the next 18 months, Emily carried on her life as normal. She played hockey for Gloucestershire and the West of England, she gained 10 GCSEs at A*/A and had no further seizures or ‘deja vus’. I don’t think she really thought she had epilepsy as it did not affect her life at all. She did find the Tegretol made her put on weight and feel down and so her dose was reduced with no ill-effects.

After 18 months and because she felt the tablets made her lethargic, she was weaned slowly off her tablets under medical supervision. Emily had no seizures or déjà vu episodes, continued to play hockey for the county, studied for 4 A levels and learnt to drive.

All was well for a year and we all forgot about epilepsy. After all it was now nearly 3 years since Emily had last had a seizure.

After she finished her A level exams, Emily and all her school friends went to Greece on holiday. I expect there was a lot of partying, quite a bit of alcohol and not much sleep. Emily had a seizure whilst asleep but luckily was with friends who had already seen it happen at school years before.

Emily was devastated as it meant she was no longer allowed to drive. When she came home later in the week, we got her referred to a neurologist again as a matter of urgency as she was due to go interrailing around Europe soon afterwards. This time Emily was given a different drug, and off she went for a month around Europe with friends. She had a fabulous time, got her A level results, and in September 2011 she went to University to study Geography.

This was the start of the events which led to her death. She had registered with the university doctor before she left and I had helped her fill in the forms. I remember telling her to give the details of her medication, even though it didn’t ask for it. She did indicate that she suffered from epilepsy.

Although she went to University in September 2011, Emily did not need to see her new GP until February 2012 as she continued to collect her medication from home when she visited us. Appallingly, medical records can take 3 months to be transferred from one medical practice to another. However, as Emily did not visit her new medical practice until Feb 2012, her records were already there. Not that this helped.

The Student Medical Practice operated a flawed system for the transferring of medical records. They used non-clinical temporary staff to enter the records for new students into their computer. Patients at risk, such as those with epilepsy, diabetes, asthma etc were not flagged up even though the registration form asked the relevant questions. Details of any medication dosage was not entered. These registration forms were not kept. No effort was made to find and record any letters from consultants and enter details on the computer system.

When Emily saw her new GP for the first time it was to request a prescription for her medication. The doctor prescribed Emily her tablets but in the wrong dose. She was given just half the dose she was supposed to be on. Emily did not notice as the tablets look the same, the blister pack is the same and the box is the same.

It was not the surgery’s practice to record on what basis they made their dosage decision. At the inquest the doctor said she would simply have asked the patient what they took and given it to them. We can only surmise that maybe Emily said she was on 200mg and the doctor asked if she took it twice a day and then confused 200mg twice a day with 200mg divided into two doses.

Christmas 2012 was going to be really special. We had planned a trip of a lifetime to Cuba with Emily, now 19 years and her sister, Amy, 21 years old. My husband and I left on 30th November as he had some business in the US and we were going to meet the girls in Cuba later.

On the 4th December, my husband and I were mid flight to Hawaii when Emily was found dead in her bed by her housemates. As soon as we landed our mobile phones kept pinging with messages to phone home. I knew instinctively what it would be. We could not have been further from home and it took us almost 2 days to get back. There was only one flight out of Hawaii that day - to Seattle - where we had to spend the night and the following day before we could catch another flight to the UK.

One of Emily’s housemates had gone into her bedroom that morning to borrow a jumper and had thought Emily was just sleeping late. It wasn’t until that afternoon, on returning to the house from uni, that they went up to her bedroom again and found her in exactly the same position.

It appears that Emily had collected her next prescription from the surgery in readiness for our holiday, dropped it at the pharmacy, but had not yet gone back to collect the tablets. She had missed one or maybe two tablets, and, as she was only on half the correct dose, the effect of this was devastating.

SUDEP doesn’t discriminate and everyone with epilepsy is at risk. Emily’s death could so easily have been avoided and so now yet another family grieves for the rest of their lives. 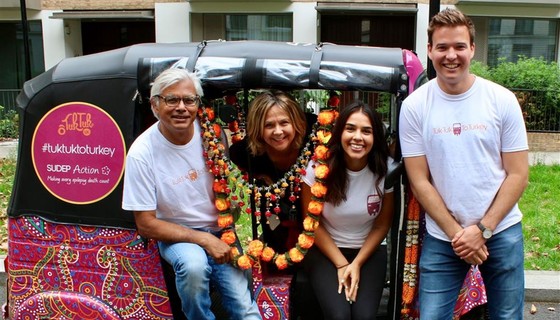 Emily's family including her Mum (Rachel), Dad (Bharat), Sister (Amy) and her sister's boyfriend (James) wanted to pay tribute to Emily, and raise funds for SUDEP Action through their inspiring 'Tuk Tuk to Turkey' challenge. The challenge would take the team on an epic journey from London to Turkey through 21 countries in acknowledgement of the 21 epilepsy deaths a week that happen in the UK. The team completed their journey in six weeks during Sept/October 2018. See the pictures and read about their adventure here.