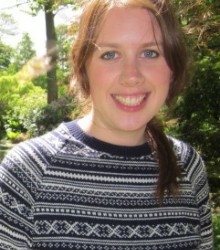 Our younger daughter Emily was beautiful, joyful and very much loved. And now she is dead. We did not lose her. She died. Suddenly and unexpectedly.  Leaving a hole in our lives that is dark and ever-present, edged with increasingly precious memories, like the tender plants that cling tenaciously to the raw edges of a flooded quarry pit.

All stories must have a starting point. I could begin this one with a search back in time for a genetic explanation for her epilepsy, but I will begin with her birth, because this story is about Emily, her life, her epilepsy, her sudden unexpected death and her impact on our lives. I make no excuses for the rose-tinted memories. She was no more perfect than any other human but we loved her dearly and we cherish our memories.

Emily was born on September 24th, 1989, in her grandparents’ home in rural Pembrokeshire. It was a warm evening and she was born to the sounds of the stream and birdsong coming through the bedroom window.  She took less than 3 hours to arrive and the following day, her dad, myself, and her sister drove the 4 miles home with her to begin our life as a family of 4.

She was a healthy, contented and sociable baby, loving to be hugged and carried. The youngest child, she regarded herself as the centre of the household and as soon as she was mobile, she would follow her sister around expecting, in the way of younger siblings, to be allowed to do all her sister did. Once she started  talking, she rarely stopped. She expected to be listened to and have her questions answered. When she wasn’t talking, she was singing.

Living in a small village, she attended the local playgroup and village school, making friends who stayed with her for all of her life. At school, she joined in with all that she could and as soon as she could write, she began to make lists of all her activities and things she must remember to take to school. Outside school, there were games of Mob, crab apple wars and water fights on the village green. There were endless sleepovers, with her group of friends who soon worked out which homes were best for late nights, film nights or games, and planned accordingly. She loved art and painted the bushes in the front of the house with her sister to cheer it up. On another occasion, she and a friend painted a mural on the back wall of the house, which lasted for 10 years, despite the poster paints being described as washable. Living in Pembrokeshire, there were walks and visits to the beach, with beach fires, sandcastles and dens.

When she transferred to the secondary school, she developed her interests in art and music.  In addition to her time with friends, her diary was full with lunchtime practices and groups and orchestras. She was sometimes frustrated at the lack of time to do all she wanted to do.  She took part in the Duke of Edinburgh scheme and went on to achieve her gold award whilst at school. The scheme developed her appreciation of the natural world and introduced her to a habit of volunteering which became a part of her life.  She went to Romania for her gold award, joining a Pembrokeshire group to help build a school for Roma children, combining friends, volunteering, a developing interest in social issues and the acquisition of building skills. The extra curricular opportunities at her school brought her into contact with young people from other schools, widening her circle of friends and perspective on life still further. Her parents’ taxi service was in constant demand.

Following school, she completed a foundation year at the local art college. Despite the daily 30 mile bus journey to and from college, she found time for BELA (basic expedition leadership award) training, leading her own bronze Duke of Edinburgh group, singing lessons, choir, and a Saturday job.  Living at home, she was expected to help with cooking, so every Tuesday for a year, we ate pasta and pesto. At the end of the year, she travelled to Central America with 2 friends, with a sense of having earned a holiday.

In her first year at Birmingham University, she decided to take a break from extra curricular activities to focus on her Art History degree and enjoying student life, but they soon crept back, with choir, yoga, Quakers, conservation and volunteering in galleries. She found plenty to see and do in Birmingham, enjoying its vibrant diversity, so different from the rural nature of Pembrokeshire.  Her circles of friends and enthusiasm for life continued to grow, and as her final exams finished, she had her sights set on internships, singing lessons, art activities and adventure.

On May 17th, 2012, she celebrated the end of exams with a night out with friends. The next morning she was dead.

Emily had her first generalized seizure on 22nd January, 2005. She was at a sleepover and we had planned to pick her up and go shopping. She phoned to say she felt unwell and once home, she described how she had frightened her friends by shaking and making strange noises. As she slept, we turned to the internet and realized her description matched that of a seizure. The doctor mentioned epilepsy and referred her to the consultant.

On February 28th, she saw the consultant paediatrician who gave us a book on epilepsy. It mentioned SUDEP and we later asked about it, but our minds were set at rest as we were reassured that it was rare and she was low risk.  On September 8th, following an EEG, Emily was seen by a consultant paediatric neurologist. Sitting with us, facing a line of doctors, she was told that she had Juvenile Myoclonic Epilepsy and prescribed medication.  Fragments from the recent past fell into place, her pausing and forgetting what she had been talking about, which we had affectionately put down to her mouth not being able to keep up with her busy thoughts, we now saw as absence seizures; her occasional morning twitching and knocking her drink, we now recognized as myoclonic jerks

She would need to take care of herself, avoiding sleep deprivation, too much stress, reflected light off the sea (due to photosensitivity), but with careful management, including taking her medication, the prognosis was very good.  After the initial shock of diagnosis, Emily’s positive attitude to life returned. She felt she could cope with her epilepsy. Back at school, Emily laughed when one of her friends got upset. ‘You don’t die of epilepsy – that’s cancer.’ She was open about her condition, but as her seizures only occurred shortly after waking, many people were unaware she had epilepsy.

Emily had 27 generalised seizures over the 7½ years she had epilepsy. She kept all medical appointments and followed the advice she was given. Her medication was increased and in 2011, it was first suggested that she consider changing it.  As she progressed through her final year at Uni, she became concerned that her concentration and memory were not as good as they had been and she was given extra time for her exams. At the time of her death, she had an appointment booked with the consultant to plan the change of medication, having felt that with University finished, she could return home for a while, to have our support during the changeover period. Our focus was on the associated risks of seizure (falling and hurting herself), not having given SUDEP any thought since the early reassurances. Looking back and with the knowledge we have now, we can see patterns we did not see at the time and if we had known more of SUDEP, we would all have pressed for action. Emily was a young woman who loved life.

When Emily did not appear on the morning of May 18th, 2012, her housemate went into her room and found her on her front, apparently sleeping. She phoned 999 and tried to resuscitate her, but Emily had already been dead for several hours. Emily’s body was taken to the local hospital, her computer and phone taken to the police station for safe-keeping and her room sealed as a possible crime scene. This was an unexplained death.

Her housemate’s family came to collect her and our local police came to inform us.  Then began a race against social media. Emily’s sister was working as a temp in Glasgow. The agency had shut for the day and we were unable to find out exactly where she was. We spoke to her boyfriend who promised to be there with her when she got home and could ring us. We prayed that she should not find out before she got home. Emily had been due to come home with a friend for a wedding that day. We contacted her friend’s family to let them know before she called at the house to be met by the police. Word soon got round and support started flooding in, whilst we made endless phone calls to family, friends, police and the coroner’s office. We would be able to go to the funeral home that weekend then, no, it would not be possible to see her before the post-mortem and they were uncertain when that would take place. We should not plan the funeral for at least 2 weeks because of the uncertainty. Time passed in a surreal haze of grief. One week after her death , I answered the phone. ‘ Mrs Rastall? This is X from Birmingham Coroner’s Office. We need you to come and identify Emily’s body.’ Another corpse on another working day.

The inquest was opened and permission given for us to bring her home for burial. Her funeral was held on June 6th, 2012 and the final inquest with its verdict of SUDEP was held one year later, on June 6th, 2013.  Her medication had been at a therapeutic level, there had been no other drugs or alcohol in her system, there were no marks on her body, no sign of a seizure and all her organs were healthy.

In the absence of any evidence to explain her death and with her history of epilepsy, the coroner’s verdict was SUDEP.

This story has no end for us, or others who loved her. The unexpected and sudden death of a healthy young person touches many lives. As bereaved parents, we are changed in the most fundamental of ways and we learn to walk with one foot in eternity. Whilst we celebrate our daughter’s life and all she brought to our lives, we feel the ache of her absence every day. We have learnt that tears and laughter co-exist, that there is joy at the saddest of times, like the sun at her funeral, and sorrow at life’s happiest occasions such as her sister’s wedding. We have learnt that people react differently and that support can come from the least expected of places. We have learnt to accept our brokenness, taking each day as it comes, enjoying the good times and withdrawing when we need to.  We know that increasingly, there are times when we can carry on with our familiar strength, but there will always be the other times of retreat. Our world has changed, but alongside our grief is a growing determination to work with others to start the conversation about SUDEP.