Home › Elizabeth
Back to stories page 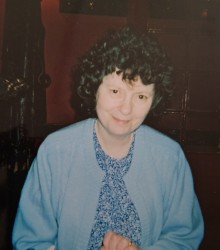 Elizabeth appreciated the wonders of life such as nature, had high values, cared for other people and benefited from a good sense of humour. She was diagnosed suffering from epilepsy in 1971, and endured many major tonic-clonic seizures, during which she lost consciousness. The seizures grew worse as she became older.

Her love of life and close friendships helped her to recover from her constant seizures, and frequent hospital visits, which included being a hospital inpatient in London on six occasions.

Her stamina, calmness, sense of humour and ability to overcome the hurtful prejudice by a few people, enabled her to endure. An example of the prejudice was when a local person appointed Elizabeth to a very small job as a cleaner, but as soon as the person found out that Elizabeth suffered from epilepsy, she was very cruelly thrown out of her job with immediate effect. Ironically, the person worked for a television company and was appointed as their health correspondent shortly afterwards.

When her first seizure occurred, it was uncertain what was happening. The local doctor sent her to hospital, where it was confirmed that she had suffered an epileptic seizure, with the epilepsy lying dormant. This resulted in regular medication and hospital appointments. She suffered from tonic-clonic seizures. After some seizures, it took her days to fully recover, but her spirit was undaunted.

Elizabeth endured several frightening episodes that, included letting go of a pram at the top of a hill, due to suffering a tonic-clonic seizure and consequently, losing consciousness with some bystanders chasing after the pram, and others staying to help Elizabeth. She also fell onto a fire while losing consciousness following a seizure, with her clothes catching alight. This resulted in six weeks of hospital treatment due to burns to her stomach.

Elizabeth was taken and admitted into the local hospital on numerous occasions. But as soon as the local hospital became aware that she was being cared for by a London hospital, the local hospital decided not to interfere with her treatment. She had many tests and occasionally she was allowed out of the hospital for a short period, while she was with a family member. There was a local park near the hospital in London that Elizabeth attended, with many lovely trees, shrubs and flowers. Elizabeth found this park relaxing. On one occasion however, she went into a local café and a person realising that she was unwell, stole her handbag.

She cared about the other patients without interfering. Once, she drew the “Mr. Men” characters in the form of vegetables to help the other patients think about happier aspects. She also wrote out the Lord’s Prayer in calligraphy lettering, for one of the consultants who was delighted. Elizabeth often walked around the ward to keep her circulation going. Calligraphy was to keep her mind occupied. There were many side effects of her medication, as well as seizures with these side-effects including tiredness, confusion and lack of mobility and memory. Elizabeth was offered an operation to stop her epilepsy but when a consultant explained the extent and dangers of the operation to her, Elizabeth decided not to proceed with the operation. If Elizabeth had been younger, the consultants would have insisted more.

She was also treated at hospital in London for osteoporosis. In one instance she fell, not heavily, onto the carpeted bathroom floor and broke her arm in two places that took many weeks to heal. We were on tenterhooks in case she fell heavily, although she was in a wheelchair. Her osteoporosis had to be treated by injections.

Elizabeth struggled from her seizures, that worsened to the extent that when she had recovered from a tonic-clonic, we were awaiting the next seizure to occur.

She became gradually weaker, and when she suffered two tonic-clonic seizures that brought on a heart attack, her end was nigh, and then she was kept on a life support machine.

However, Elizabeth’s legacy of her endurance against her health difficulties, her appreciation of life’s simple wonders, her care for others and her sense of humour - lives on and maybe a sense of inspiration to others.