Home › Drew
Back to stories page 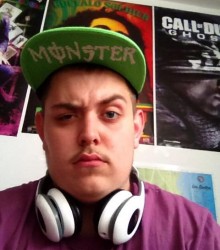 Our Drew. How do I describe our Drew?

22 years old and well, let’s say you couldn’t miss him all 6ft-odd of him! Our gentle giant. Big ears (he wouldn’t mind us saying this as his party piece was sticking them in and making them pop out). Always wore his Monster cap and wrapped up in a big body warmer and shorts, even in the height of summer.

Drew was fantastic artist, he loved Arsenal FC, much to his dad’s disgust as we are Newcastle United supporters. He won a ‘Give Racism the Red Card’ competition, which he got to go to St. James Park, watch a match and meet all the players (his dad, Derek was more impressed and excited to be there than Drew). He loved American football and WWE wrestling, he and his brother, Ray, would roll around the floor when they were little, pretending to be The Rock and Stone Cold Steve Austin.

Drew was a fantastic big brother to his little sister, Grace. She adored him, and so did his big brother Ray and little brother, Matthew, who has autism.

Drew was diagnosed with epilepsy at the age of 13yrs and spent nearly two years in a hospital near Stafford, which was devastating for us as he was so far away. Thankfully, he was eventually well enough to return home.

The night of 1st August 2017, Drew headed to bed saying, “tell my dad to get me up”. He always got up and even ironed his dad’s tops for work and made him a cuppa every morning for work, they enjoyed their chats (or arguing about football).

He said he loved me, as he always did, and asked if he could have some money for his cigarettes - and those were the last words I’ll ever hear him say.

That next morning, I was woken to my husband shouting for me to call an ambulance. We tried, with instructions from the emergency services on the phone, to get him on the floor and start CPR. But looking back I think we both knew he had already been taken from us. The wonderful paramedics arrived and tried to help, but after what felt like forever, we were told there was nothing more they could do. My son, my wonderful boy, my baby was gone.

Our lives will never be the same without our boy. I wake up every morning and for one flash of a moment I've forgotten, then I remember, and the emotions and grief come back.

We are one of the few who had heard of, and knew the risks of, SUDEP. A few years before I had organised a 15-mile charity walk with my darts team, in aid of a charity that was set up by parents who lost their daughter to SUDEP. But as I have heard and much said, "never thought it would happen to us”.

I have set up a Facebook page called ‘Being awesome for Drew with Team RH’. Where I will be getting fit, losing weight and doing all sorts of activities in Drew’s memory and raising awareness of SUDEP. I want to celebrate Drew’s life and memory. Make him proud, as I was of him, and not let grief swallow me up as grief can do if I let it.