Home › Christopher
Back to stories page 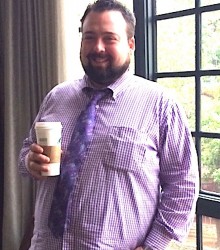 Christopher was a long awaited treasure for us, as he came later in our lives. From a toddler onwards, he was a man of his own mind. He was always full of hope and loved life. He always rejected the negative and found humour in all. His wit was quick. His vision clear. His mind was brilliant. Christopher was always in vogue, loving the finer things in life.

Christopher always knew his direction and worked diligently towards that goal. Obstacles thrown his way only made him more determined. He was so full of ambition. He attended University of Texas at San Antonio and Texas State University gaining a degree in Marketing and Mass Communications. During college, Christopher aspired to work in the culinary world, where he excelled, developing a tremendous love and curiosity for the various foods of the world. After graduation, and becoming a bartender extraordinaire while finding his way, he entered the world of sales, with great success. Christopher never did anything halfway. He always wanted to be at the top, first. He wanted to rock the world! Our sweet Chris was always shooting for the stars. Now he is resting amongst those very stars.

Christopher developed epilepsy during the last year of his life, and it was this affliction that ended up taking his life at the age of 30. He had never had a seizure until college where his first episode occurred whilst studying for exams. He was rushed to the ER with seizures. The neurologist claimed it was not epilepsy. Christopher had random seizures after that -  all night seizures. Nevertheless, he was not considered to have epilepsy.  Then, one day, he had a seizure while driving and caused an accident.  With that incident, it was finally determined that Chris had epilepsy.  The first medicine prescribed worked like a charm, not another seizure. Then, a year later, on 28th December 2015, at midnight, out of the blue he had a tonic-clonic seizure which ended his life.

A beautiful life cut far too short. Christopher will be incredibly missed, always cherished in many hearts. He left behind many deeply saddened friends and family, all loving and missing his beautiful smiling face and his contagious love of life. Christopher was a genuinely beautiful person, through and through.