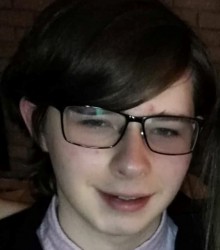 My son Chris was a bright, lovely child when he was growing up. Always curious and thinking about things and how they worked. People often said he was like a ‘little old man’ as he often responded in an adult manner way beyond his years.

He showed a great interest in how people’s minds worked and asked for his first psychology book at 11 years old!

Chris had his first epileptic seizure in January 2016, when he was 15 years old. It was a nocturnal tonic clonic seizure. He was taken to hospital, but no one expressed a great deal of interest in one seizure.

In September 2016, he has his second nocturnal seizure and was referred to the neurologist who prescribed medication. Chris was studying for his A Level’s and found even on low doses the medication caused him memory and cognition problems. He returned to the consultant who prescribed alternative medication. He was still worried about the effects this might have on his studying and as he only experienced 1-2 seizures a year he decided to stop the medication.

The hospital made no further contact with him, there were no suggestions for further monitoring and no mention of SUDEP.

Chris continued to have 1-3 seizures a year, it became obvious that they were exacerbated by emotional stress and anxiety. Chris and I discussed medication during this time, and he said he felt his epilepsy was not a problem.

I had helped Chris complete the paperwork for him to be able to access the DSA for extra support.

We talked about university and the change in lifestyle, and we saw a neurologist in the new area we had moved to. Chris and I agreed that medication at this point was probably a good idea.

The neurologist was about to prescribe different medication, but then said he was not convinced it was epilepsy. He thought it might be ‘non epileptic seizure disorder’. As he said the seizures had started during a very emotionally traumatic period in Chris’s personal life. He decided not to issue the medication pending an EEG and wanted Chris to return in September 2019.

Chris was offered a place through clearing to study Psychology at the University of Sussex. He was over the moon that finally his dream was becoming a reality.  I was then in process of trying to set up additional safeguards such as mattress sensors and a seizure wrist sensor. Clearing students weren’t guaranteed on campus accommodation, but due to his epilepsy and some determination we secured him a place on campus on 28th August.

Chris and I had arranged to go a see the University of Sussex on 31st August and stay overnight in Brighton to explore. Chris never made this trip, as on 30th August 2019, my sister found that Chris had passed away in his sleep during the night.

The post mortem cause of death came back 13 weeks later, as SUDEP. I cannot find the words to describe the loss of my son; it feels as though my heart and soul has been ripped away and I have lost the person in my life that I loved the most, and greatest friend I had ever known.

We are all devastated at the loss of such a kind, caring and intelligent young man who had a bright future ahead of him. We have collected for Young Epilepsy and we are currently collecting to try and raise enough money to train a Support Dog for someone with epilepsy/disabilities and we are hoping to name the dog Chris, in his memory.

I did research epilepsy after Chris was diagnosed and each of the main websites stated that SUDEP was an uncommon event, and more likely to happen to people with uncontrolled frequent seizures. Chris’ 1-3 seizures a year were not considered frequent. SUDEP was never mentioned, and the main worry seemed be about falling and hurting themselves or getting stuck in status epilepticus.

I know now that the risk of SUDEP is not just likely to occur to people with more frequent seizures, it can happen to anyone with epilepsy.

I feel that professionals should advise everyone diagnosed with epilepsy about the risk of SUDEP in anyone who has epilepsy. A risk assessment should be completed with their risk highlighted and this should be updated at regular intervals, or if there is a change in their seizure pattern. This information is not meant to scare people, but it does allow them to be fully informed of the risks involved and what to do to minimise these risks.

We might have made a different decision had we been given the full information; as Chris and I could have made the decision to persevere with the medication, until a reasonable medication with tolerable side effects had been found. We might have questioned the neurologist’s decision not to issue the medication, but in all fairness, I believe that there is a lack of an awareness of the true risk of SUDEP within the clinical profession. We will never know now whether this would have made a difference, and Chris would today have been studying at university, instead of us grieving the loss of this wonderful young man.