Home › Chris B
Back to stories page 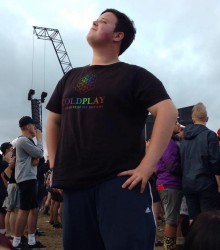 I am sure he was put on this earth to make me laugh, which he did every day, a normal down to earth boy, who loved gaming and watching wrestling.
Fast forward to April 2018, myself and Chris were on a train going to the O2 in London to see a concert and he said “ Mum I have something to tell you” all worried. I told him to go ahead.
“Well I don’t know what’s happening to me, but I have times where I go vacant and I’m out of it.” Worryingly I responded, “Oh we all do that, nothing to worry about. “
He went on to say that his close friend Tommy would describe it to me as he didn’t know himself exactly what he did, or for how long, but Tommy had witnessed it.
Once at the venue, we were having a pre-concert meal, and Chris jumped up and headed for the toilet, when he came back, he started to talk gibberish and I was alarmed. Within minutes he was ok. Once inside the arena, the concert about to start, Chris asked me to hold his drink, what I witnessed was alarming, he started to do, only what I can describe as, silent laughing, his eyes glazed over, lasted about 15 seconds.
Again, after he was a little confused , I told him, “ Chris I think you just had a type of seizure.”

Within days we went to the GP, he diagnosed absence seizures and referred Chris to a neurologist. We saw the neurologist in June 2018 and she prescribed medication to be taken after he had a EEG, she also referred him for an MRI and sent us away with a handful of leaflets.

All this time I was in denial about what was happening and thought perhaps it was stress related, as Chris was at college studying Media. Or that it was possibly hormonal.
I was clueless.
We got the results of the EEG and MRI both came back normal, however Chris was having these absence seizures a few times a day, but we were hopeful as his medication could now start.

At the end of July 2018, one evening I heard a bang coming from my kitchen, which doubled as Chris’s gaming area. He was having a tonic clonic seizure, and was propped up by my patio doors, his lips were turning blue, his airway was compromised. I managed to get him into the recovery position and phoned for an ambulance, hysterical, as seeing my 17-year-old, 6’2” tall baby boy having a full-on seizure was frightening and shocking. As it was his first tonic clonic he was taken to hospital but was released after a few hours.

I emailed his neurologist she saw us at an emergency appointment and arranged for a sleep deprived EEG. All the while my beautiful loving boy took everything in his stride, continuing and determined to live a full life, still going to concerts, going out with his mates etc.

The daily absence seizures continued and by September 2018, Chris became anxious and depressed because of his meds, which were then changed. And the fact he was scared he would have a tonic clonic in public and hurt himself. For three weeks he never left his room. I was petrified he was suicidal. He had a full on tonic clonic seizure about every 3 months and had a sleep deprived EEG in November 2018, this diagnosed generalised Epilepsy, we couldn’t work out what the trigger was.

From about the middle of 2019, Chris was having a tonic clonic monthly and absence seizures up to 4 times a day, he had deferred his second year of college, for a year. He was afraid and sometimes incontinent during a seizure so had to wear pads, which was embarrassing for a now 18 year old, he stopped going out. He couldn’t, from the anxiety, only going out to hospital appointments.

At a neurology appointment at the end of January 2020 , Chris now 19, we explained things were worsening, and I also told the neurologist I thought Chris may have sleep apnoea. She referred him to hospital for a 24 hour sleep monitor which he had at the end of February, and another sleep deprived EEG, which was scheduled for the 9th of April.

On Monday the 6th of April we received the devastating news Chris now had severe obstructive sleep apnoea. Chris was heartbroken and broke down in tears, “Mum why me, I want my old life back.”
I was heartbroken for him, the hospital wanted to see him at the earliest opportunity for treatment but this was at the height of COVID-19.

On the 7th of April my daughter, 22 at the time, returned to work after maternity leave. Chris and I had a day in the garden with his niece (my granddaughter) playing in the sandpit and paddling pool, had a lovely day. I went to bed at around midnight, I was furloughed from work. I hugged Chris as always, as he played and chatted to his friends on his PC in the kitchen, told him I loved him and reiterated a lot and he replied I love you Mum.

At around 12.50am I sent him a text to say keep the noise down, as he was laughing and joking with his friends online still and I was afraid he would wake the baby. At about 2am I heard him come upstairs and use the bathroom before bed, I was always on high alert worrying he would have a seizure and I would not hear him; I always did. He went to his room. I went asleep.

At 10.00am on the 8th of April 2020, I woke with a start, I had slept in, which was rare as every morning, when not working, Chris would text me from his room, “ You awake?” He would then come in for a chat and a snuggle.
No text this morning though.
I thought, ‘oh he had a late night, let him sleep.’
Around 10.20am I got up and listened outside his door, he would go mad if I woke him. I thought I heard him, but something told me to go back and go in and check.
I knocked, no reply. Strange. I went in and there was Chris laying on his side on his bedroom floor still as anything, his nose and mouth was partially under his bed base, I shook his thigh, nothing and looked down, his left ankle and foot looked mottled, it was then I knew he was gone. There was blood near his mouth on the carpet, so he had obviously had a seizure, I was screaming very animal like, telling my daughter to call an ambulance, shouting ‘he’s gone, he’s gone’.
She was hysterical and the baby bewildered.

Paramedics and police turned up and confirmed Chris had passed a few hours earlier and a post-mortem result, about 10 weeks later, confirmed SUDEP, which is on his death certificate. We were never once told of SUDEP, probably didn’t want to frighten us. I was ill prepared and feel guilty,  this one time I didn’t hear a thing, neither did my daughter. And I never in a million years in my naivety thought I would lose my wonderful son, my best friend to epilepsy.