Home › Charlie
Back to stories page 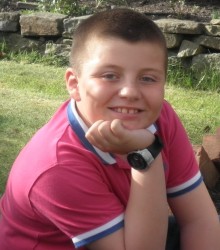 Until the 7 October 2011 Charlie was a perfectly fit and healthy 10 year old boy.  Four days later on the 11 October 2011, a week after his 10th birthday our gorgeous little boy died.

Charlie had his first witnessed seizure on Friday 7 October 2011.  His 15 year old sister, Isabella, was home from boarding school and was very frightened about the entire episode. The Paramedics arrived some 12 minutes later and took over until Charlie regained consciousness at about the 15 minute point. They incorrectly diagnosed as a Febrile Convulsion.  How wrong they were!!

Over the weekend Charlie was fine but we were not happy with the diagnosis, on Monday 10 October, we took him to see our local GP. Charlie explained that he often woke up during the night gagging and needing a drink and quite often couldn’t feel the rest of his body. Our GP suggested that Charlie might be suffering with Nocturnal Epilepsy and referred him for an emergency appointment to see a Neurologist. The earliest available appointment was the 18 November 2011.

On Tuesday 11 October 2011 we made a decision to visit our daughter as she had returned to her boarding school on the Sunday and was very concerned about Charlie. We took her out for tea in order to show her that Charlie was fine and that he had been referred to see a specialist. We had a lovely evening and Isabella felt much better having seen Charlie, who was his normal self and we had such a happy and funny time together.

Charlie went to bed that evening at 8:45 pm, an hour later he had died.  We were downstairs and heard nothing!

We then struggled as we had to wait for the initial Post-Mortem which indicated that no medical reason for Charlie’s death could be found. Lots of further tests needed to be carried out, including brain histology. We then received the Coroner’s Inquest which recorded Death from SUDEP.  A silent Killer!

Charlie had 2 massive seizures, and the second one caused a bleed to the brain, and ultimately killed him. Nobody can tell us categorically that he only had two seizures, because if he had been having nocturnal seizures, he may have had others that went unwitnessed.

We had never heard of SUDEP before the death of our gorgeous little boy. More worrying still, is that many people in the medical profession have also never heard of SUDEP, and yet more people die per year as a result of SUDEP than to Cot Death. Everybody knows about Cot death, and it seems that very few people know about SUDEP. We just don’t understand why SUDEP seems to be hushed up and not openly and very publically acknowledged.  We have since learned that Charlie fell into a high risk category due to his age, gender and the fact that his seizures appeared to be nocturnal.

How does such a fun loving, full of life little boy suddenly drop down dead, and it goes unnoticed by the medical professionals?

Jan and Charlie's Dad, Barrie, have since worked hard to create a training programme for emergency staff to warn them of the risk factors associated with SUDEP when caring for patients with seizures. The family have worked with the South West Ambulance Service Foundation Trust (SWASFT) to create a training package for Paramedics and other Health Professionals to help raise awareness of SUDEP and Epilepsy Deaths. Part of their project involved creating a series of resources and training videos telling their story and exploring the lessons which can be learnt in Charlie's memory. The NHS also reviewed Charlie's case to ensure that consistent practice was put in place when responding to cases of convulsions in children.