Home › Blair
Back to stories page 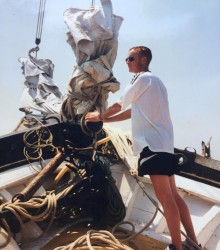 A 20-year letter for Blair

It’s been 20 years since you died, but I needed that long to write this.

You taught our family much about life and death.

You were raised a happy child and went to school in England despite your Scottish blood. Like most children you got into trouble, maybe a little more than most.

From a young age, your temperament matched your hair: fiery.

You were strong like Dad but also sensitive like Mum. Your blood flowed with a sense of brotherhood and I would know no enemies with you by my side.

You lived with epilepsy as an affliction. In life, you fought it, and in death you faced it.

Sometimes a thought hard to shake is the unanswered question, “Did you suffer any pain in your final moments?”

Your seizures would roll in at night as you slept. Countless nights Mum, Dad and I would wake to hear you moan as your mind weathered the storm.

We would comfort you until you came around, and when the cloud of consciousness came back I would look into your eyes and wish I could snatch the confusion, sadness, and anger from you.

When we were young I would often slip into your room and sleep next to you without a cover, shivering against the wall as I kept an eye on you in case the seizures came.

You would wake in the morning and kick me out of bed, “Idiot, get out”.

You didn’t let your epilepsy hold you back. You wouldn’t talk about it either. Your way was to shove your dark passenger to the side.

You drove a car and a motorbike. You operated tractors and worked with heavy machinery on golf courses. You didn’t give a damn about what your epilepsy wanted you to do. You were going to do what you wanted. And we respected you for that.

Your life was taken from you while you were sleeping at a house party in Edinburgh. They called it SUDEP or Sudden Unexpected Death in Epilepsy — something Mum, Dad or I didn’t know was possible. Your last seizure was just too strong.

I remember coming home from school and finding our driveway packed with cars, our house full of family, and Mum taking me upstairs to tell me through glazed eyes and a broken heart,“Blair’s gone”.

That took her great strength to say.

Mum and Dad were both inconsolable. Grandad couldn’t get out of bed for two days. Our entire family were there for us. Friends, too. They came to your funeral by the hundreds. Danny still carries the newspaper clipping in his wallet. You left a mark on many of us.

Since then, Mum and Dad have been on a long journey, but they are happy.

Dad still tells people when asked he has two sons and “always will”. I thought you would like that.

A few months ago, while I stood watching Mum arrange flowers at your grave, I asked her if she would like to be buried when her time comes.

“No, I want you to bury half my ashes with Blair and the other half you can put in a firework and set me off to explode over Tyninghame Beach.”

Your death changed the direction of our lives  — we have learned to live as three instead of four — but there is always a chair at the dinner table for you.

As for me, you know where life has taken me. And you know your hand in its direction.

In the 20 years since you died, you have continued to be as defiant a character in death as you were in life.

You simply won’t shut up and rest in peace.

You remain at the root of the biggest decisions in my life and I know the undeniable mantra planted in me by you: Live for the moment.

I’ve been writing to you for 20 years. Telling you things from many places around the world. Good times, bad times, you’ve heard it all. But until recently it was always me doing the talking.

A few months ago, I joined a writers group and was asked to free write, to let the words flow.

And as I wrote to you, something strange happened as my pen scrawled across the page.

You wrote back. My ink, your words, addressed to me.

What you said moved mountains in me.

For the first time, I was able to read aloud a message from you to me in front of a group of people who showed no judgment but instead applauded our effort.

So that was an important day for us.

Since then, we’ve had a reunion of sorts.

All kinds of unexpected things have happened.

In March this year, I travelled to Antarctica.

As I stared at the mountains rising from the sea on the shoulders of glaciers, I imagined you standing there, where I have seen you in dreams. I think we came to an agreement of sorts — that I had travelled far enough. That a chapter can close, and a new one can start.

You will be happy to hear over the coming months I will be creating an epilepsy documentary project in memory of you with a talented group of friends from around the world.

And that means your legacy will live on through stories and creativity.

While it’s been 20 years since you died, today imagination is a wonderful brother to have.

Thank you to SUDEP Action for publishing this memorial letter. I will be supporting its work in an upcoming epilepsy awareness documentary and would be happy to be contacted by anyone involved with the charity and for my details to be made available through SUDEP Action.