Home › Bethany
Back to stories page 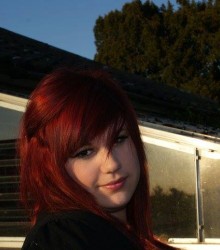 Beth, as she liked to be known, died from SUDEP on the 2nd of August, 2010, aged 17.  She had been diagnosed with juvenile myoclonic epilepsy in March. It had taken a lot of GP appointments to get her referred to a neurologist at our local hospital, as she had the odd absence and occasional jerking, where she dropped anything she was holding.  I knew that this wasn't normal, although the GP said there was nothing wrong, that she was just anaemic and probably stressed due to taking her GSCES.

Beth settled down for a time, she was intensely private and wasn't with me all of the time so I suspect it was still happening, but she was saying nothing. I decided to take her back to the GP and this time, we saw a locum who immediately gave her a referral to the hospital. We were told Beth had juvenile myoclonic epilepsy, but it was very common and she should have no problems once she was on medication. There was no mention that it could be life threatening, I felt relieved that she had a diagnosis and that as far as I knew, nothing to worry about.

Beth did well in her exams, despite her medication having to be changed around a bit as she seemed to get worse. She was then accepted at a sixth form college to study photography and art {her two great passions}, she also studied classics. She settled in really well and met lots of new friends.  She had always been quite a shy girl who loved cats and horses and was happiest, looking after a neighbour’s horses, which she had been doing since around 8 years old.

She told her few close friends that she had epilepsy but it was no big deal, and she didn't want to be seen as different.

The night before Beth died she was fine at home, was chatting on Facebook to her friend and I could hear lots of giggles as they were messaging each other.   She woke me at 6am as she fell down outside my room, when I asked if she was okay, she said she was fine but hadn't been able to sleep much that night; there had been quite a lot of nights where she was struggling to sleep. I told her to go back to bed and that I would look in on her just before I went to work at 8am.

I went in to her room at 7.45am and couldn't wake her, she was lying face down and I immediately thought she might be suffocating in her pillow, so I removed it and turned her over. I then rang for the paramedics, and that was when my world began to crumble. Beth was buried two weeks after she had passed, and her funeral was beautiful, a celebration of her life with so many people there. She had a woodland burial which was very fitting for the sort of person she was.

Life has changed, but I`m thankful that I had 17 years with my girl and saw her blossom into the woman she would have been. My mum said Beth walked to a different beat of the drum to everyone else, and that is so true of her, and I know she would want me to share her story.