Home › Becky
Back to stories page 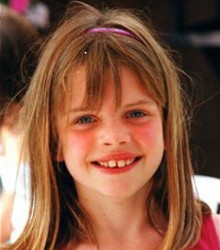 On a wet spring morning in May 2004, just three months short of her twelfth birthday, Becky became a victim of SUDEP.

Becky suffered her first seizure in September 2001 and was promptly seen by a registrar at the local hospital. We were soon sent on our way with ‘nothing to worry about, it’s probably a migraine, we can’t do anything more unless the seizures become more regular and frequent’.

Over the next two years Becky suffered sporadic night time seizures. However, the hospital’s words of comfort turned to concern when the seizures became more frequent during the first weeks of January, February and March 2004. We pushed for a referral to a paediatrician who still insisted that Becky was suffering from migraines but, under pressure, arranged for her to undergo EEG and, subsequently, MRI scans to ‘prove us wrong’. Following the EEG, he did concede that Becky may be suffering from epilepsy but seizure medication was ‘out of the question for a child this age’. There was no mention of SUDEP.

Becky died three days before we were due to visit the hospital to discuss her MRI results. Three days after her death we heard the words ‘sudden unexpected death in epilepsy’ for the first time in the form of a passing, rather ambiguous, reference from the Coroner’s Office. Some web searching uncovered the SUDEP Action (working name of Epilepsy Bereaved) website and our first viewing of the acronym SUDEP… and the horror associated with it.

In hindsight, her earlier life had given clues to her epilepsy. She appeared to have early learning difficulties and was investigated for dyslexia. The results confirmed she actually was a very bright girl who just ‘drifted off’ for brief periods. These absences were probably the early signs of her epilepsy. In fact, during the last months of Becky’s life she experienced brief ‘flashing light/colour’ visual disturbances on a daily basis that continued to be diagnosed as migraines.

Beautiful, fun-loving, intelligent, creative, Becky was much loved by all who knew her. How we have missed not having the chance to see her grow into adulthood. Our beautiful Becky is no longer with us, but her memory always will be.

Roger and Sandie continue to raise awareness of epilepsy deaths and the work of SUDEP Action in memory of Becky. In September 2020 they took part in ‘Remember a Charity in your Will Week’ – helping to raise vital awareness in The Scotsman Newspaper of one of the ways to support SUDEP Action and our work.

You can read their interview below: 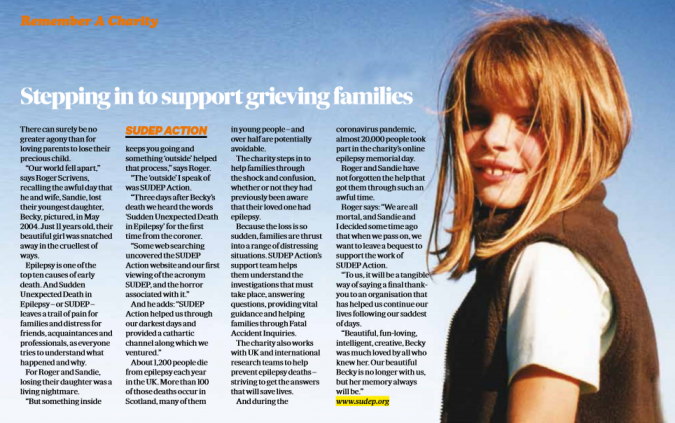