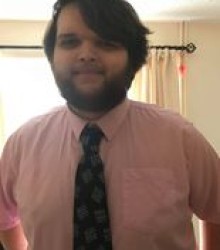 Our son Anthony John William Ellis (AJ) was an amazing person, and our eldest child. He had his first seizure in March 2020 and was told the usual – it’s probably a one-off thing. We had to watch him suffer for months until in July, he was diagnosed as having epilepsy. At that time, he was 22 years old.  Nothing stopped him, but we seemed to be getting more phone calls regarding AJ’s seizures or telling us that he was being taken to the nearest hospital.

AJ loved life, he loved helping young adults and was part of Inspire and Achieve which works with young adults. He loved card games and had a massive collection of them. He could tell you anything about Dr Who, Pokémon or Dungeons & Dragons. He followed all musicals especially Hamilton, he was always singing the songs in the car.

He started treatment in July and the dosage steadily increased in the following months. His seizures were getting stronger and with his 6ft 4in frame they were tougher to watch. He could never let you know anything about the seizures and he could be out of it for hours.  By November 2020 his seizures were out of control, four or five a day. On one occasion, an ambulance was called because we couldn’t bring him round and this resulted in the diagnosis of Covid-19. He spent five days on oxygen in hospital and no one could go and see him. When he came home, we eventually got a call from the epilepsy nurse with information of how to deal with the seizures.  He was given basic information, for example, take showers rather than baths, and try to get down low when you feel a seizure coming on.  We weren’t told anything about SUDEP.

AJ had two young brother and they were so close. We kept a diary of his seizures, we monitored his heart rate and recorded it.

July 21, 2021 had been a very hot night and AJ hadn’t slept well. He got up about 8am, had a little bit of breakfast and then decided he was going to try to get some sleep because he knew tiredness affected his epilepsy.

The only time I had heard about SUDEP was when I was looking on an epilepsy website. Why weren’t we, as a family, told anything about it? Maybe we could have done something more, we will never know, we lost our rainbow baby, a son who we were told we couldn’t conceive.

We are all devastated and everyone should be told about SUDEP.  Sleep tight our truly amazing son.