Home › Alan
Back to stories page 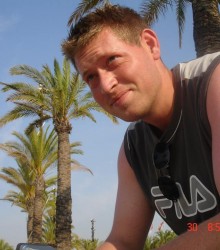 I have (had) two sons, one born 1984, one in 1985. Less than 14 months between them, they were very lively boys, could not breathe in same room without annoying each other.  Always used to say I’d hate that time back.

But I so wish I could have it now.

Alan was the oldest. When he was around 25yrs old, he started having seizures. I’ve seen him resuscitated more than once.

He lost his HGV and car licence. He did get the car one back, twice, but had to be clear for five years before getting HGV one back.

He would say to me he ached some mornings waking up; I would ask him if doctors had said he was epileptic. His answer always same “Mum I’m ok”.

Due to patient confidentiality, the hospital staff could not give me any information.

I believe that Alan was not truthful about having seizures at night, he did not want to lose his licence again, he really wanted his HGV one back.

Alan drove the local dust cart for a job, his granddad (my dad) did as well, he was very proud. They were like a couple kids together. (Dad passed July 2017, so they are back together again.)

The week before Alan died, he had been sent home being unwell a couple times, it turns out on the Friday he had made a phone appointment with his doctor for the following Tuesday morning.

The doctor rang his mobile on the Tuesday, there was no answer. So, he rang his work, Alan had not arrived.

Two friends went to where he was staying at that time; they found Alan had died in bed.

The previous evening, he had text his friend saying he was scared and that he would have been starting medication after speaking to his doctor.

But it was too late.

Like many others, I found out about sudden unexpected death in epilepsy (SUDEP) on Alan’s post mortem result.

SUDEP needs to be spoken about by the doctors and consultants and acknowledged. Yes, it may frighten people, but it’s too late once a loved one has gone.

Alan would still be here today if I had heard of SUDEP.

We talk about diabetes and what you need to do to look after yourself. SUDEP should be acknowledged in the same way.

Epilepsy, like any condition, is something you need to make sure that you live as healthily as possible. Look after yourself, rest and sleep when you need to, everything in moderation.

Epilepsy needs to stop being a stigma - you can lead a normal life. People need to be told about SUDEP. Yes, it may scare people living with epilepsy, but it’s much, much, better than dying not realising you could have lived and possibly prevented it.

Alan was also a brilliant golfer, with a handicap of 6, (he once got a hole-in-one aged just 13!). Every year, at the Woodbridge Golf club, they have a memorial game where they have bottles drink in memory on hole 7.

In November 2018, I held an open garden for my 40+20 birthday. Friends and family came along and we were able to collect some donations for SUDEP Action.

On my car I have SUDEP ACTION signs with photos of Alan on. Not a week goes by, where I don’t get someone asking me about them.

Alan is still helping others. One of his sayings was: "I thought about it – it is the thought that counts.”

We are the voices raising awareness of SUDEP, helping to save future lives.

If you are concerned about your (or loved one's) epilepsy, visit our information pages to learn more about epilepsy and managing risks.

For further help and support, contact us on [email protected].