Home › Epilepsy medications will be exempt from Brexit after coalition intervenes

Epilepsy medications will be exempt from Brexit after coalition intervenes

The Sunday Times reports Serious Shortage Protocol for medicines will not apply to epilepsy, after epilepsy coalition intervenes to protect patient safety, but campaigners warn we need plans public and in writing

A coalition of epilepsy, neurology organisations and the All Party Parliamentary Group on Epilepsy, who predicted rising deaths from use of a Serious Shortage Protocol for medicines (The Sunday Times, 6th January 2019) call on government to make a clear statement regarding their medical contingency plans for epilepsy and neurology, after The Sunday Times reports epilepsy will now be excluded from the protocol.

Last month, it emerged that in the event of serious drug shortages, the Government has plans to use emergency powers to authorise pharmacists to overrule medical prescriptions.

The leaks to The Times (7th December, 2018) and an `informal private consultation` by Government on a draft Serious Shortage Protocol’ which included epilepsy, raised anxieties across patient organisations. Expressing concerns about the risks to patients if the proposed protocol was to go ahead, allowing pharmacists to overrule medical prescriptions in the event of a national medical shortage. On 21st December 2018, the Government published it’s EU Exit Operational Readiness Guidance including a “Serious Shortage Protocol” that would involve changes to medicines legislation.

Epilepsy affects over 600,000 people in the UK, and people with epilepsy risk developing new seizures if their usual medication is altered. Although, for some medications a change in version is not risky, but substituting a different version of many epilepsy medications, risks breakthrough seizures and side-effects. There are 21 epilepsy-related deaths each week, many in the young. This planned contingency measure has the potential to make matters worse. We predicted unnecessary deaths resulting from the use of these powers.

A letter was sent to Matt Hancock MP, Secretary of State for Health and Social Care, on 21st December 2018, calling for action to address the likelihood of medicines shortages in the near future and expressing concerns about the Serious Shortage Protocol.

The coalition letter was sent to The Sunday Times on 3rd January 2019, calling again for the Government to rethink the plans that have been shared with the sector and urges full openness and scrutiny of emergency planning.

The Sunday Times has since reported today (Sunday 6th January 2019) that the Government will exclude epilepsy from the Serious Shortage Protocol, following the request for a response to our letter.

“Whilst we welcome hearing from The Sunday Times that the planned protocol will not include epilepsy, it begs the question about other neurological conditions and what alternative contingency there is for conditions, like epilepsy, that will be excluded. We urgently need a statement from Government on what assurances ministers can give at this time about continuity of supply of essential medicines.”

Following the Prevent21 Summit, SUDEP Action has forged a coalition of epilepsy organisations (Epilepsy Action, Epilepsy Research UK, the British Branch of the International League Against Epilepsy and the Epilepsy Specialist Nurses Association), The Neurological Alliance and the All Party Parliamentary Group for Epilepsy

See a full copy of our letter below: 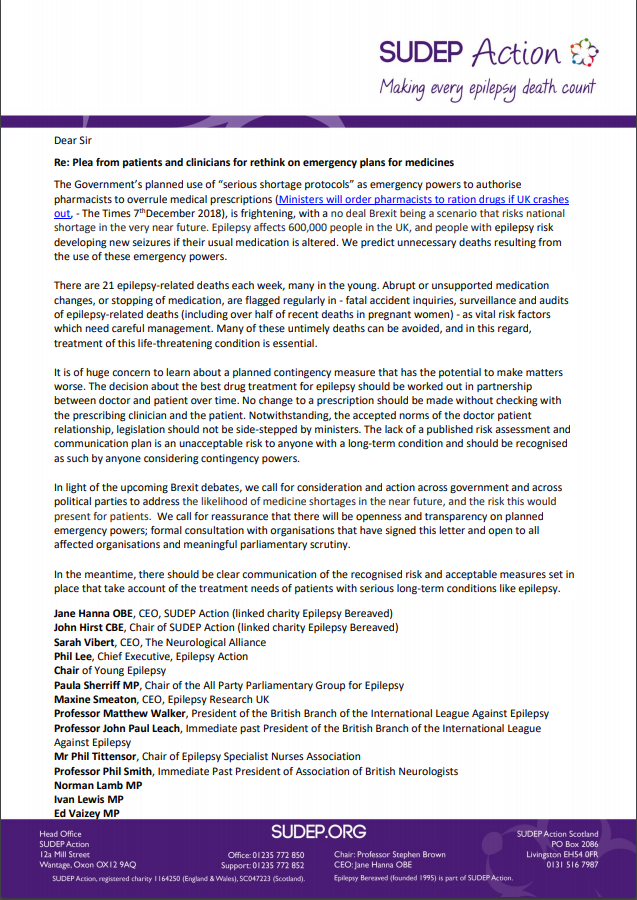 What can I do if I am concerned about my medication?

If you are concerned about your epilepsy medication, there are number of things you can do:

Please support this coalition and write to your MP

Consider writing to your local MP, download our template letter. If you dont already know, you can use this link to find out who your local MP is.