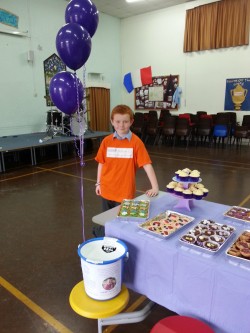 Leon’s mum Lorraine explained that: “Leon-David wanted to raise money for SUDEP Action in support of his godparents Jan and Barrie Burns whose son Charlie passed away from SUDEP in October 2011.  He saw an advert for the Purple Day fundraising and came up with the idea of holding a cake sale at his school, Upton Heath C of E Primary in Chester.”

“Leon-David spoke to his school council about his cake sale idea and shared with them what SUDEP meant to him.  They all agreed to Leon-David holding the Cake Sale and thought it was a great cause.”

With help from his mum Lorraine and grandma, Leon-David donned his chef’s hat and took to the kitchen, baking and decorating an astonishing 300 cakes and biscuits.  He chose what cakes to bake and even asked the local cake shop for some cupcakes.  Furthermore, Leon-David made posters to help raise awareness and promote his event. 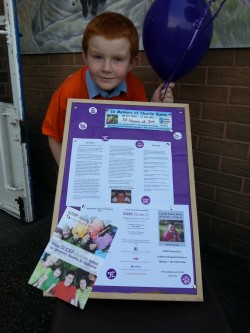 He set up his cake stand in the school hall after school on Purple Day. On hand to help out was his mum Lorraine, aunty, grandma and some teachers.

Lorraine said: “When we opened the doors there was a huge line waiting and we started selling out of cake and biscuits really fast.  Some families where buying 10 or 12 at once so we all had to use our math brains.”

“Leon-David sold out in 20 minutes and was sad about having to turn away the rest of the people.  When he got home he found that there were some cake and biscuit ingredients left over so he made some more cakes.  He took them along to my Weight Watchers group and then on to his Football team and sold them all again.” 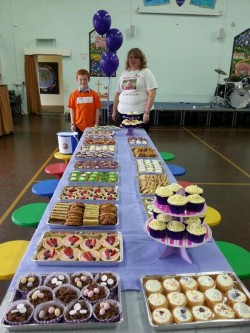 project on, getting all the information together and standing up to talk about SUDEP made me very very proud to watch him"

Commenting on his impressive efforts Leon-David said:  "I felt proud of myself for selling all of the cakes and it felt good supporting SUDEP Action.”

The Burns commented: “Once again someone so young is making a difference. It is fantastic to see people supporting us in the fundraising and more importantly spreading SUDEP Awareness.  Thank you Leon-David and the Mickleson family for your continued support, it means so much to so many.”