On Christmas Day 2014, a team of friends and family members braved cold murky waters to swim across the Weymouth Harbour in memory of Daniel Dench. Daniel (Dan) died from SUDEP on 30 March, 2013.

His mother Sally Dench said: "Dan himself had planned to swim the harbour for charity in 2011 but had to pull out at the last minute because his youngest daughter was born on that Christmas day. The family felt it was a great way to remember Dan and knew he would have been laughing at them while they all shivered!" 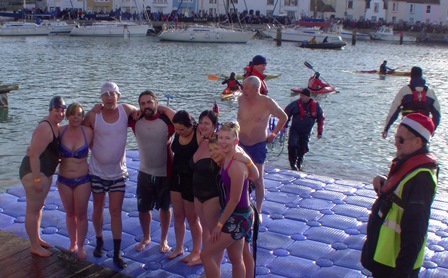 "It was a very cold morning but we had beautiful sunshine. They were all very brave, swam with no wetsuits, one team member even swam in her bikini! We were so very proud of them all"

The team managed to raise some much needed funds and awareness for SUDEP Action.

Sally commented: "We managed to get a very good news piece on the local radio talking about the fundraising and SUDEP Action, they got it word perfect! We also had a good write up in the Dorset Echo on the 24th of December and another piece after. What's more, we had a piece in the free paper that goes out to every home in Weymouth and Portland.”

Sally was pleased with the media coverage they achieved saying: “Overall, we had a lot of coverage and my daughter Nicola even spoke over the loud speaker just before the swim. Sixteen of us wore the bright orange hoodies we made for the event and they really helped us draw a lot of attention. I was so pleased we had them made, we had people coming up and asking questions, you certainly couldn't miss the bright orange! 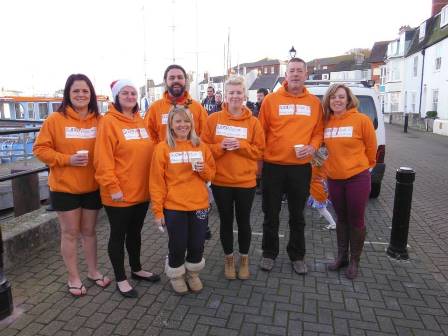 "We had set ourselves the target of raising £3,300 and we are delighted to say we reached our target by mid-February raising a total of £3,349. This was raised from the harbour swim, the firework event in November and a tea total that my husband and I held in January."

Plans are already under way for two major fundraising events by Team Dench, Sally explained: “Firstly Dan’s twin brother Michael will be holding his second Rugby 7s Tournament at Weymouth & Portland Rugby Club on Saturday 2nd May. Then on Saturday 17th October, Dan’s sister in law Laura will be holding her second ‘get your frock on’ Ball at the Riviera Hotel in Weymouth.”

"And so here we are now into another year, to be honest it certainly doesn't get any easier. It seems impossible to think that before we know it, it will be 2 years since we lost Dan. None of our fundraising events would be possible without the fantastic support we receive from family and friends, even folk who had never met Dan. It Goes without saying we miss Dan dreadfully and life will never be the same, he was such a good and honest young man. His smile, laughter and sense of humour are missed by so many.”

“What we do now is all in Dan’s memory and hopefully in some small way will help others with Epilepsy go on to live long and healthy lives.”