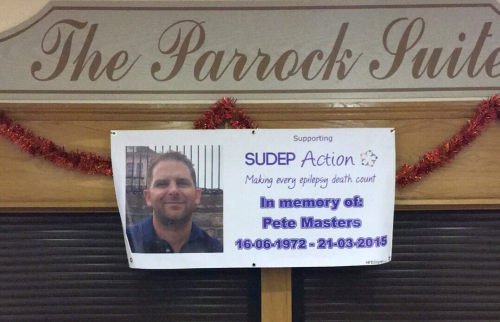 I am a full time mum to two boys, Jamie, 16, and Josh, 13. I work as a full time postwoman and love making cakes and cupcakes.

Pete Masters was my partner and soul mate. We lost Pete on 21 March, 2015, at the age of 42.  After losing Pete, I did some research about SUDEP and found SUDEP Action. I then started to get more involved in awareness and fundraising for SUDEP Action to keep Pete's name and memory alive.

In December 2016, I held a Snowflake disco. I got the idea when I was making a friend’s wedding cupcakes with a snowflake theme, and I really wanted to do something that involved everyone having a really good night out just in time for Christmas. I had asked for sponsorship over the previous months for the Santa ran and the London 10k, so a disco seemed like the right thing to help give something back, but at the same time raise awareness and money for charity.

We had 160 people attend, if not a little more, including family and very close friends, and all of Pete's work colleagues and friends, which was an amazing turn out. We had so many raffle prizes and a photo booth which was such fun for everyone.

At the end of the night, I stopped and looked around, and the room was still full and everyone was thoroughly enjoying themselves. For me this was the highlight of the night as I know from that, that Pete would have been so proud of how it had turned out, and if he had been there he would have been in the thick of it all being a little mischievous. It was just how I wanted the whole evening to be, everyone dancing, singing and just having a fantastic evening, and for those who knew Pete to raise a glass or two in his memory .

I have so many people to thank who supported me and stood by me, it was my little project, and no one ever said don't do it, but just supported me.  My amazing sister in law Mandy always backed and supported me, my best friend Mary who has always been there and stood by my side as I had a little wobble while I made a speech to raise awareness of SUDEP, but most importantly, has stood by my side from the day I lost Pete. My lovely neighbour Sue who prepared all the food for the buffet, and Jamie Reach for not only doing the disco but also donated his time and evening to the charity that night. I have made some amazing friends who have also supported me from the start. I am totally blessed and touched but the amount of support from so many people surrounding me.