At Churcher’s College, Petersfield, East Hampshire , we sadly lost a student, Edward Vergette aged 17, to SUDEP in 2013. Since then, SUDEP Action has been supported by his pastoral house, Grenville. We ran the Hellrunner in his memory.

Many students were eager to run the race in early September.  Others needed to be persuaded later on; some trepidation was felt at first!  A couple signed up one week before the event!

The Hellrunner comprises mud, hills, and bogs, including the notoriously freezing, neck-high ‘Bog of Doom.’ This was the toughest but everyone approached it with good humour, and no one ran it alone.  It was freezing when we came out! There were some parts of the race that were gruelling, but the higher purpose spurred us on. 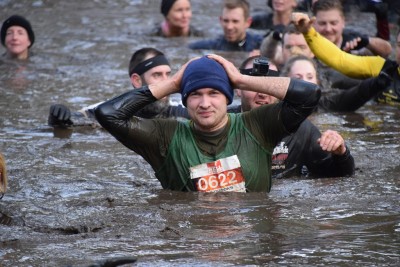 Some of the pictures of various Churchers’ running, struggling on in the race tell more than a 100 words and on seeing the photos, many gave generously to the cause. Our fastest runner, Joseph Mullender, completed the race in 1 hour, 39 minutes and 9 seconds, finishing in 47th place.

The whole run was tough but worth every difficult mile. It meant a lot that we were raising money for a good cause.

Ultimately everyone enjoyed the event and it was great when everyone got together for a picture with the SUDEP banner. We are really pleased to have raised money for SUDEP Action, we were glad to raise awareness of SUDEP and contribute towards research.

“Carole and I are very impressed at the time and effort that the staff and pupils at Churcher’s College continue to put in to support SUDEP Action. It was a fantastic effort by everyone involved and they should be very proud of what they have achieved”