19th Oct 2016
A place to thank, appreciate and celebrate our fundraisers.

Some super SUDEP Action fundraising went on in September. 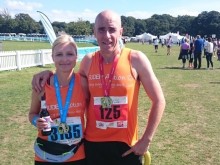 Ian Cole and his wife raised funds in memory of their son Aedan Cole. Ian commented: “My wife and I decided to raise funds for SUDEP action and raise awareness of Epilepsy in the UK. We lost our 5 year old son Aedan in March 2014 due to SUDEP, and we are living with the daily nightmare as his sister Amber also has Epilepsy. I foolishly signed myself up to the New Forest Marathon in September, and my wife conducted a 10km run. The course was very muddy and wet but it didn’t dampen our spirits and we are very proud of what we have achieved.” 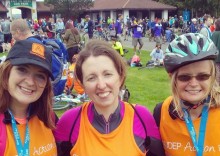 Emma Torrance and her sister-in-law Lorraine took part in a Pedal for Scotland event in memory of Emma’s sister Lynnette Torrance. Emma informed us: "As part of Pedal for Scotland, I cycled the 46 miles from Glasgow to Edinburgh (up and down many hills!) alongside my sister-in-law Lorraine and our friend Sharron. We raised money and, importantly, awareness for SUDEP Action after my sister passed away last year. Let's see what challenge presents next year..." 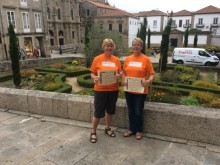 Lizzie Johnson along with her sister took part in a 100K trek in memory of Greg Johnson. Lizzie commented: “My sister and I walked 100km of the pilgrimage route to Santiago de Compostela in Spain in memory of my youngest son, Greg, who died in 2012 aged 24. We walked through the Galician countryside, encountering fellow pilgrims from around the world. Remarkably we avoided blisters and mosquitoes and were rewarded after 5 days by the sight of one of the most beautiful cities I have ever seen. I loved every minute and hope Greg would be proud of us.” 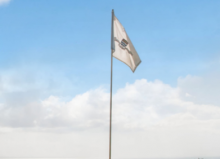 SUDEP Action Chief Executive Jane Hanna attended an event at Lyme Regis Golf Club. Men’s Club Captain John Coley commented: “24th September saw the final fundraising for our Captain’s Charities at Lyme Regis Golf Club in aid of two charities, including SUDEP Action. An Open competition attracted 120+ entries play, with entry fees helping to boost our total. Before prize giving, SUDEP Action’s Jane Hanna was driven around the course to watch play from a buggy, much to her (childish) delight and then gave a short talk on the charity. A charity auction followed with the star item being a week in St Ives. The final amount for the year is not known yet but Ladies Captain Caroline Baker and I are confident it will be a record charity year!” 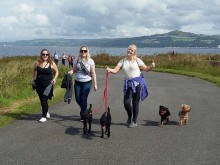 Friends and family of Alan Donaldson took part in their annual sponsored walk. Alan’s mum, Christine Donaldson commented: “Every year around Alan's birthday, his family and friends get together to walk round the Island of Cumbrae in the Firth of Clyde and remember Alan. It is always a great day and this year was no exception. The sun shone while we walked and continued to do so in the beer garden where we all met at the end for a well-deserved refreshment or three. Only one person was missing this year. Alan's sister Lorna gave birth to beautiful Jacob Alan the day before the walk - which added to the celebrations. He will definitely be there next year!” 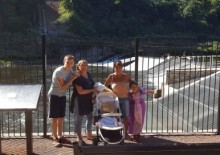 Emma Channon and some of her family members, took part in an annual charity walk in memory of Rebecca Davies. The team passed beautiful scenery along their journey, some of which you can see in their picture taken at the half way point. 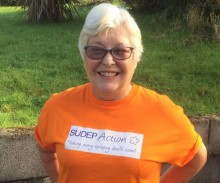 Helen Morgan raised funds in memory of her son Martin Morgan. Helen informed us: "It was the 17th September when I made my way down to the band stand in my home town of Aberystwyth. My work had organised a day for me to sell my cakes and I made a Welsh delicacy called Bara Brith. It was such a lovely feeling talking to passers by and raising funds and much needed awareness about SUDEP. Losing my son, Martin, was an immensely sad time and raising awareness brings me so much comfort."

Anthony Hick and his local Rotary Club raised funds in memory of Anthony’s son Owen Hick. Anthony informed us: “Kingswood Rotary Club have an annual wine and cheese evening at a member’s house. This year some 40 of us packed into Arthur’s house and as I’m President this year, it was my opportunity to have a very pleasant social evening, raise money and promote SUDEP Action. Most had never heard of SUDEP, but many later shared stories of people they knew who had epilepsy, so I was glad I went armed with leaflets!”

Thank you and well done to all our September fundraisers. The money you raise enables us to support people who have lost a loved one  to epilepsy. We also campaign for change and fund research to prevent future epilepsy deaths. We greatly appreciate your help.

If you took part in a fundraising event in September and would like to be featured in this blog then don’t worry, it is not too late. Email [email protected] with your event details.